The CJM asked Khan his name and then acquitted him of both the charges against him under Section 2/25 and Section 27 of the Arms Act. 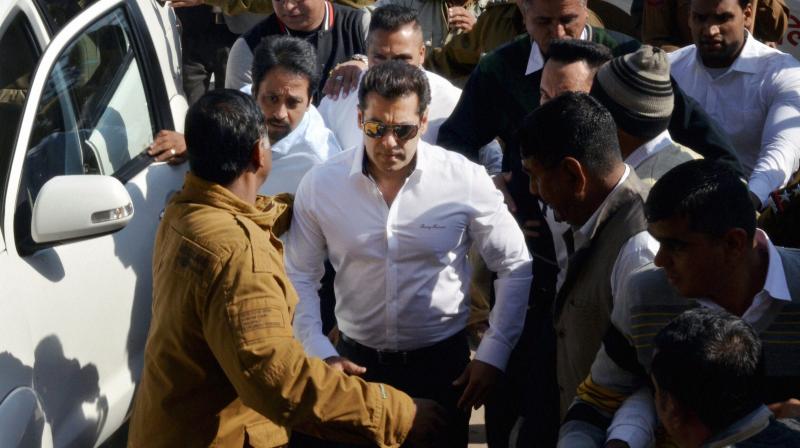 Salman Khan, walks through a crowd outside the court, has been acquitted in 1998 Arms Act case by Jodhpur court, in Jodhpur. (Photo: PTI)

Jaipur: Bollywood star Salman Khan arrived more than an hour late at the court to hear the judgment in the 19-year-old Arms Act case against him, but walked out a free man within seven minutes.

Chief Judicial Magistrate (GJM) Dalpat Singh Rajpurohit, who had ordered Salman Khan to be present in the court during pronouncement of the judgement, took only two minutes to deliver the verdict once the actor arrived.

The CJM asked Khan his name and then acquitted him of both the charges against him under Section 2/25 and Section 27 of the Arms Act. Salman was accused of carrying possessing using arms — a -0.22 rifle and a 0.32 revolver with an expired license — to kill two blackbucks in Kankani village near Jodhpur on October 1-2, 1998.

Giving Salman the benefit of the doubt, the judge declared him “not guilty” as the prosecution had failed to produce adequate evidence and witnesses to prove its case beyond reasonable doubt.

In the 102-page order, the judge also observed that the two post-mortem reports on the deer listed different causes of death — dog-bite and gunshot wound.

Salman’s lawyer had argued that the actor only had air guns and there was no evidence that he had used firearms neither during the alleged hunting nor while he was staying in Jodhpur.

“The court admitted our arguments that Salman was framed in this case as there was no concrete evidence against him,” the actor’s lawyer Hastimal Saraswat said. Luckily for the actor, an eyewitness for the prosecution also did not show up.

However, prosecution lawyer B.S. Bhati said that the decision would be challenged in the session court after studying the judgment. The Bishnoi community too had hinted filing appeal against the decision.

Salman and a few other Bollywood actors were accused of poaching blackbucks on the night of October 1, 1998 during the shooting of Hindi movie Hum Saath Saath Hain. There were three cases of poaching and one case of the Arms Act against him in which he was acquitted on Wednesday.

The actor was already acquitted in two poaching cases in Bhawad and Ghoda Farm by the high court against which the state government has filed SLP in the Supreme Court. The third case in Kankani village would come up for hearing on January 25 when the court will read charges to him and co-accused Saif Ali Khan, Tabbu, Sonali Bendre and Neelam.

Earlier, dressed in a crisp white shirt, the 51-year-old star came to the Jodhpur court with his sister Alvira. The actor appeared tense but smiled later when the judge acquitted him. He greeted, shook hands with fans and also signed autographs before leaving the court — all in just about seven minutes.