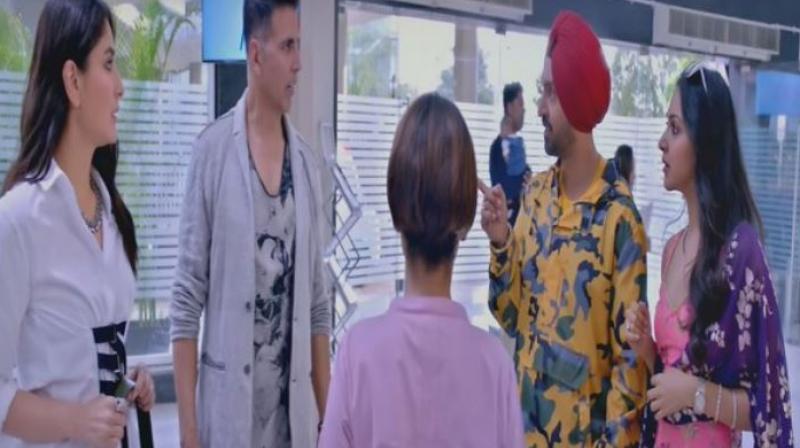 A still from trailer of Good Newwz

Mumbai: The highly anticipated trailer of ‘Good Newwz’ is out and you will definitely roll on the floor laughing. It features Akshay Kumar, Kareena Kapoor, Kiara Advani, and Diljit Dosanjh and promises to take you on a laughing spree.

The film talks about the journey of two couples Kiara, Diljit and Kareena- Akshay who have the same surname ‘Batra’. They are having difficulty in conceiving and decide to consult the doctor for the same.

The opening scene reveals Akshay and Kareena meeting a doctor and talk about IVF(in vitro fertilisation), and Kareena is all geared up for the same. But the major twist happens when Akshay and Diljit’s sperms by mistake get mixed up. Later when the doctor informs them on the mixup the couples are all left in a state of shock.

In order to stay close to his child who is in Kareena's womb, Diljit along with his wife Kiara shift to the apartment where she stays with her husband Akshay.

In the end, Kareena delivers a baby who is an exact copy of Diljit which leaves the couple baffled. With a dose of light-entertainment punches, Akshay and Diljit's funny one-liners will certainly make the audience burst out in laughter.

Directed by Raj Mehta, ‘Good Newwz’ will run at the theatres on December  27.