A picture of Deepika sticking her tongue out while walking the red carpet at Cannes made news immediately. 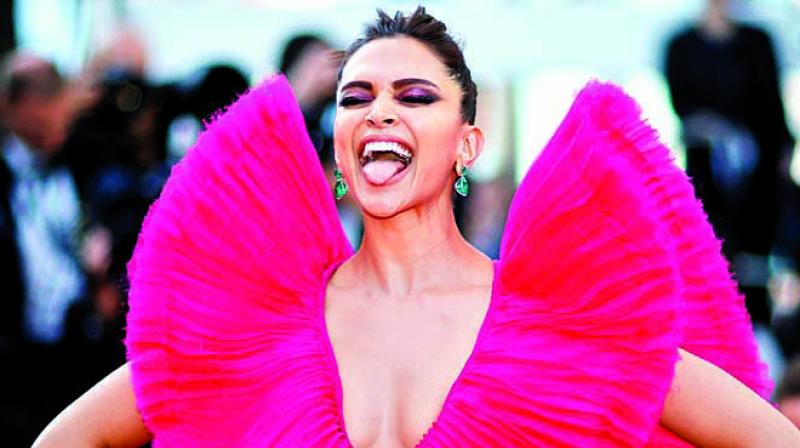 Rumour has it that Deepika Padukone and Ranveer Singh have secret cues, which they use on social media platforms to communicate with each other, especially when the duo is apart.

A picture of Deepika sticking her tongue out while walking the red carpet at Cannes made news immediately. What made bigger news, however, was her Instagram post, which featured a photograph of her playful moment, and was accompanied by the tongue-sticking-out emoji. The post also had the caption: Because every picture has a story to tell.

Sonakshi Sinha immediately replied to the post, saying that she wanted to know the story behind Deepika’s cryptic Instagram offering. In the meantime, Ranveer Singh promptly called her Gulabo for her pink outfit.

While Deepika and Ranveer have kept the story more or less to themselves, we are told by sources that the couple wants to keep the fun and the romance going on social media when they are away. “Deepika does not wear ‘atrangi’ (outrageous) clothes like Ranveer, but she wants to return the ‘atrangi’ favour with a pose at least. Ranveer’s clothing sense has shocked many and made them give him a second look because no A-list star in India does that these days. He is clearly inspired by Govinda. Deepika cannot afford a Govinda-like costume, but she does want to do something that is out of the box for Ranveer to enjoy,” says our source. For those who logged in late to Instagram, here’s more. This is not the first time that Deepika had stuck her tongue out in a post. She had done so earlier for Vogue and Prabal Gurung. Interestingly in January when Deepika posted a mem about her and a pun with a cone, Ranveer burst into a never ending hahahahahaha on the social media platform.