Akshay Kumar, Priyanka Chopra and many other stars took to social media to pay their respects to the talented actress. 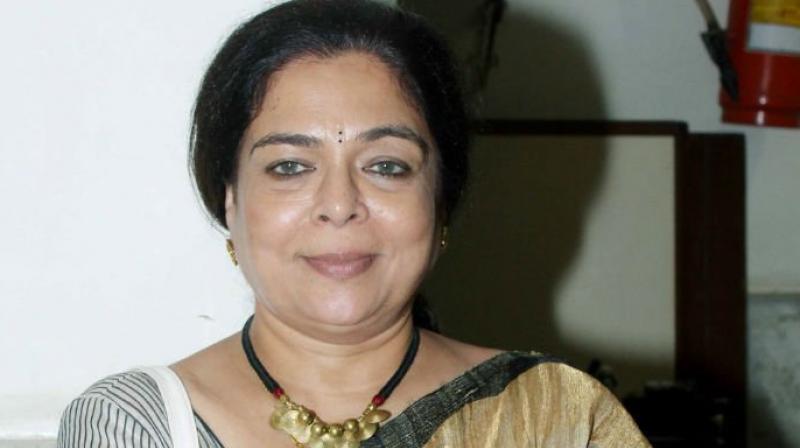 Mumbai: The death of Reema Lagoo has come as a shock to Bollywood celebrities, many of who have shared screen space with the actress over the years.

On Wednesday night, Lagoo, who was only 59, complained of chest pain and suffered a massive heart attack. The actress was rushed to Kokilaben Dhirubhai Ambani hospital in Andheri where she breathed her last.

Lagoo’s former co-star Akshay Kumar, Anushka Sharma and gen next star Alia Bhatt have expressed their sadness and shock over the sudden demise of this Bollywood doyen on social media.

Akshay wrote: Saddened to hear about the demise of #ReemaLagoo, had the opportunity to work with her...a fine actress and person.Prayers to the family

Anushka: Grew up watching d warmth & love #ReemaLagoo ji brought out on screen. Saddened by her sudden demise.Heartfelt condolences to her family... 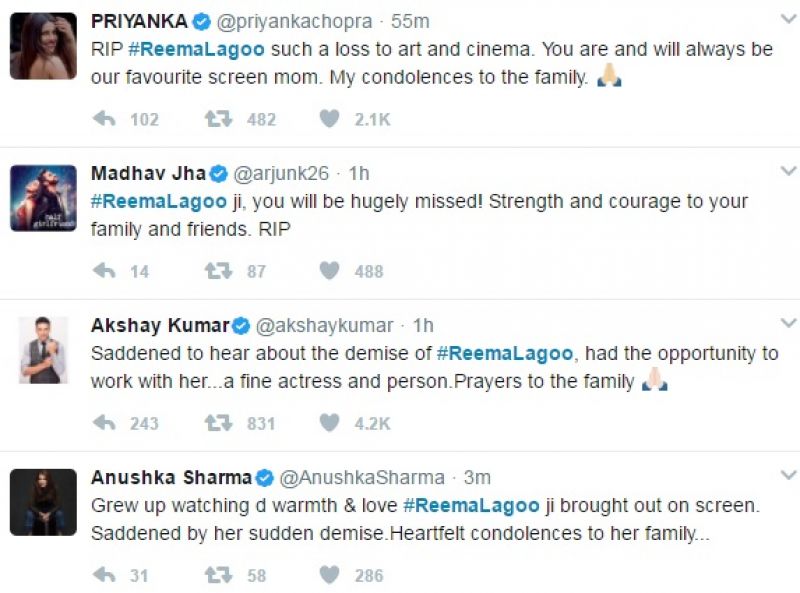 Alia Bhatt: So so sad to hear about Reema Lagoo ji!Such a phenomenal actor & a lovely warm person! I have always loved & admired her work. Shocked!! 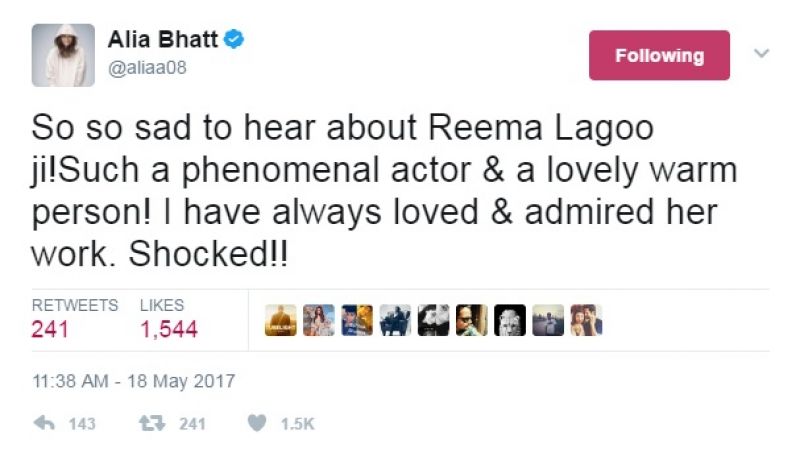 Reema Lagoo had played Sanjay Dutt's on screen mother in 'Vaastav,' shattered by the actress' sudden demise, he said, "I have lost a mother again today. We worked together in several movies and every time that I worked with her I learnt something new. Her demise has left a void which is difficult to fill. May God give strength to her family and close ones."

Madhuri Dixit and Randeep Hooda are mourning her death too and have expressed their grief on Twitter.

Renuka Sahane, who played the role of Lagoo's daughter in 'Hum Aapke Hain Koun', shared a touching post on Facebook.

"Reema Tai....the first time I met you, many, many years before I got to work with you in films, was at your home. You had made amazing "matkichi usal". I couldn't take my eyes off you.....you were so beautiful. Then I saw you on stage...." Savita Damodar Paranjape" " Ghar Tighancha Hava"....you were outstanding.....what an immensely powerful actress you were on stage! I was in awe of you....a huge fan. I wouldn't have imagined I would get the opportunity to work with you a few years down the line.

"Hum Aapke Hain Koun"....I played your daughter. I would joke with you that I wasn't suited to play your daughter since you are so beautiful...."मी नक्कीच looks department मध्ये Anupam Kher वर गेल्ये". You would laugh full throatedly at this comment, slap me playfully and say "काहीतरीच काय!"

We used to share our Tiffin boxes, make-up rooms.....you were protective about me.....if an actor became too friendly you would help me get out of any such situation.....I could spend hours watching you get ready. Though you would want to get ready as fast as possible because you didn't much care for spending time on make-up. You didn't need it much because you were naturally so beautiful.

Once I got my camera and asked your permission to click your photos in black & white.....you were a bit embarrassed but allowed me to experiment with what I wanted to do....I wanted to take a picture of you in the mirror.....You were thrilled with the photos....but they didn't do justice to your beauty.....And the Hindi films you did didn't do your immense talent justice....and life hasn't been just in snatching you away so early!

I'm sharing the black & white photos I clicked with a very heavy heart.....the last thing I wanted was to share them as an obit to you. Rest in eternal peace my beautiful Reematai 🙏🙏🙏🌷"

A popular face in the 80s and 90s, both in Marathi and Hindi films, Reema Lagoo started her acting career in 1970s and will always be remembered for her roles in 'Maine Pyar Kiya', 'Hum Aapke Hain Koun', 'Kuch Kuch Hota Hai' and 'Hum Saath-Saath Hain'. Her contribution to Indian television is also commendable, 'Tu Tu Main Main' and 'Shriman Shrimati' are some of her notable roles in small screen.