Keeping up with Kareena

The Begum of the film industry gets candid about her style mantra, favourite looks, and husband Saif Ali Khan. 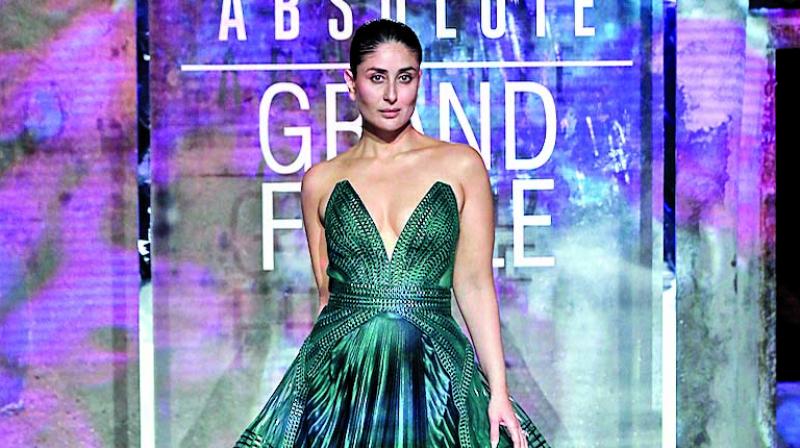 Kareena Kapoor Khan is pretty much synonymous with good style and accessible fashion. Be it her ‘Poo’ glam in Kabhi Khushi Kabhie Gham or her real-life pregnancy style, her sartorial statements have inspired women of all age groups, a phenomenon she attributes to her low-effort approach.

“People look up to me for their styling because they think I am quite relatable. I wear clothes which anyone of us can wear, so I think that’s the way I want to connect with my audiences and fans,” says the 39-year-old as she adjusted the beige off-shoulder gown that she would soon strut down the Lakme Fashion Week Summer/Resort 2020 runway in.

While fashion mavens love dissecting her styling process, Kareena clarifies that she doesn’t put too much thought into what she wants to wear, as her idea of dressing is very casual. “Well, I want to be comfortable in what I wear and I pick up something that is comfortable. I want my personality to come out in normal clothes in day-to-day life. I don’t dress for the airport and gym,” she laughs, adding that she is moody with her clothes.

“I wear red lips because I am in a mood of doing this and would spend the day like that. If I am in a mood to dress up, I would wear something fancy and dress well, else I would sit in pyjamas,” she says.

When asked about her favourite thing to wear, the Talaash actress immediately quips that she is happiest in a sari. “I am very comfortable in it; I can last the whole night wearing a sari. Most women are not comfortable, but I am. I prefer wearing saris at night parties and weddings.” And as for makeup, “I love my skin and I always prefer to wear minimal makeup. I always put kajal when I go out. It’s easy, you can just sit in the car and do that and that’s more than enough,” she reveals.

This easygoing attitude has seemingly stuck with her in spite of all the body-shaming and negative comments that people throw at actresses. “This is happening because there is a lot of accessibility of social media,” she avers. “When you put everything on it, then people will comment. So better to stay away, and if you want to put up pictures, then don’t take trolls seriously. That’s what I do. I do what I feel,” she adds.

One might think that its easier for someone like Kareena to do what she wants as she comes from the position of being privileged, but she denies the notion. “In fact, in that case, one can’t do that. You have many baggages and responsibilities. People are constantly comparing you with sister, mother, brother and it’s always a pressure,” she avers and suggests that one has to make the best out of what they can in their life, “And that’s the way I am.”

The actress also brings out her inner feminist, saying that there should not be discrimination between the genders. “My actions speak louder than words. Whether my husband has allowed me to work, or I work after being a mother. I think these are the things what make me feminist,” the 3 Idiots actress says.

On the topic of her husband, the actress says she enjoyed his latest film Jawaani Jaaneman, co-starring newcomer Alaya F. “It’s a beautiful film because it’s very urban and modern film. Both Saif and Alaya have done a beautiful job,” she gushes. The actress is quite laidback about Saif playing a boozy Casanova type in the film. “Yeah, he is an actor and he is welcome to do whatever part he wants. I think Saif is an actor who has broken all boundaries of among all three Khans — He is never stuck in one thing. He is an actor who has wings and he is going to fly, you can’t tie him down,” she says before signing off.