The evergreen Jayapradha has seven films in her kitty. 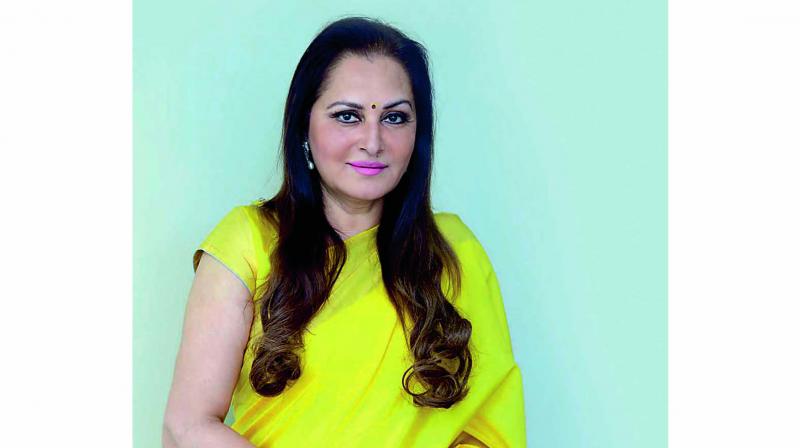 Proving that age is just a number, actor Jayapradha is busy with films in seven – yes, you heard right – seven languages. Her last appearance in Malayalam was the Mohanlal-starrer Pranayam, which the audience will not forget in a hurry. Breaking her hiatus, Jayapradha is back to Mollywood — an industry, she reveals, she is partial to because of its intellectual and real content.

Jayapradha will be seen in the impending bilingual film titled Kinar in Malayalam and Keni in Tamil directed by M.A. Nisshad. In this, Jayapradha metamorphoses into Indira — a middle-class ordinary woman who fights an extraordinary battle to bring water to her village. Her beauty has been masked under layers of dark makeup and she is clad in ordinary cotton saris but the sheer strength of Indira refuses to be masked.

“Indira is as strong and as stubborn as I am in real life,” she begins, going on to say, “In this film, the hero is the script. After becoming an MLA, I have seen up close and personal the problems that women encounter — most of which are very painful. I have seen drought conditions in my constituency Rampur, in states like Rajasthan, UP, and others I visited. I feel this is the right time for the audience to not only enjoy romances unfolding on screen but also see the harsh reality that many women face. These problems need to be voiced on a larger platform to be heard.”

Jayapradha got so involved in some scenes that tears came unbidden. Though the story is set in the Tamil Nadu-Kerala border, Jayapradha says that the subject dealt with – water conservation – is a universal one.

Jayapradha has played all kinds of roles but lately there has been a conscious shift to characters that celebrate the strength of a woman. “After becoming an MP, I have faced episodes that have made me strong and my exposure has been immense. That made me decide to take up meaningful roles that can initiate a change or set an example to society,” she says.

Jayapradha names her Tamil, Telugu, Kannada, Marathi and a Bengali film where she plays lead characters caught in complex situations that test the mental strength in her. “I may be doing smaller number of films but I want to be remembered for my roles,” she states.

A walk down memory lane has Jayapradha baring her soul, “Many of my contemporaries have stopped working or have passed away. Very few still work in films, so I get to work with talented newcomers and have adjusted myself to their work culture and contemporary subjects,” she opines.

Politics, films, dance and music – the beautiful actor has time and again walked the tightrope without any hiccups. Dance to her is synonymous with breathing but she has been missing that lately. Remedial steps are in order as she reveals, “I am planning to start a Jayapradha Dancing Academy, first in Delhi and then branch out to other cities. My ambitious mega dance ballet Amrapali is also on. Regarding singing, earlier I used to be very confident but now I am out of practice but can start practicing any time now.”  She is also busy with the colleges, educational institutions and trusts which she manages.

The term ‘dirty politics’ is as real as it gets when she talks of her political stint, “When I was fighting the elections in my constituency, my own people tried to destroy me and not make me win! Women empowerment rolls off easy from our tongues but I have seen the trauma women have gone through having faced contract shooters assigned to kill, acid attacks and threats. Character assassination is also something I braved. After the entire tempest, there is a certain calm now and that has added layers of armour to me and made me become more positive. My conviction to do more for women and children has become stronger.”