Kangana, A voice of her own

Kangana has a great style sense; this time too she looked stunning in a red off-shoulder gown with no accessories. 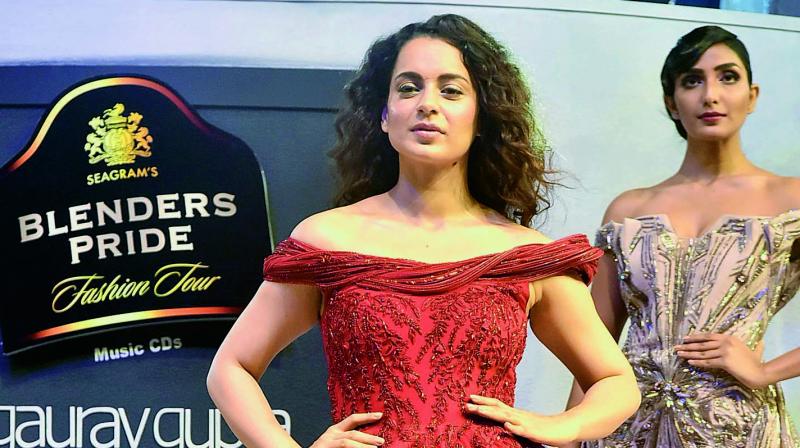 The Manikarnika: Queen of Jhansi Actress who was in the city for a fashion show, opened up about issues she cares for, upcoming movies, her connection with Hyderabad and more.

Bold and point-blank are the adjectives that come to mind when one sees Kangana Ranaut take centre stage. The actress was the showstopper for fashion designer Gaurav Gupta at the 14th edition of Blenders Pride Fashion Tour with the concept ‘pride’.

Kangana has a great style sense; this time too she looked stunning in a red off-shoulder gown with no accessories. After the show she spoke candidly on various issues, what matters to her most and what pride means to her. “What matters to me the most is having a voice of my own. For me that’s pride. Many may feel that having a voice of her own is arrogance or egoistic, but for me that is how it has been. If I see something wrong happening, I do make sure to point it out. Moreover, I feel pride and confidence are sisters working hand in hand,” she says.

When asked if, by being her honest, blunt self, did she have to pay a price? Because though she’s very talented, filmmakers seem vary of signing her up.

Pat comes her reply, “Generally, in every field people don’t prefer others who have an opinion and are smarter than them. The equation between production houses and A-list actresses is of promoting each other. For me it doesn’t work like this. The quality of work is important. I really don’t mind paying the price for having a voice.”

Even with her latest project, Manikarnika: Queen of Jhansi, Kangana’s struggle was quite evident as she had to helm the role of the director and complete the shoot. “I was definitely not ready to put on the director’s cap like this. But yes directing a mammoth film was very hard — 200 junior artistes, weapons and action scenes. It took a lot of effort right from directing the action scenes and then act in it too. As an actor, our work is to perform our best and rest is in the hands of the audience,” Kangana points out. As of now the actress doesn’t have any plans to direct or produce films. For 2019, Kangana has films like Panga and Mental Hai Kya lined up, and is very excited to portray completely different sides. “In Mental Hai Kya, the audience till the end will try to figure out who’s the black, white or grey character. Whereas, in Panga, I play a role of a loving mother,” she says.

For Kangana it is the two-hour movie format that suits her the most and not web series like her fellow Bollywood stars are pursuing now. “For me feature films work the best. But I am open to short web series which have six episodes or so. Investing more time that this is difficult. Even for this fashion show, it was sheer coincidence that when fashion designer Gaurav Gupta approached me to be a part of it, I was free. It was a pleasure working with his quirky and edgy style,” Kangana shares.

Her connection with Hyderabad doesn’t end with the fashion show. She has shot quite a bit of Manikarnika here and has good friends too from the southern film industry. But that’s not all, unlike other celebrities who rave about the quintessential biryani, for Kangana, it is the idlis from Chutney’s that soothe her cravings.