Bollywood beyond the clouds

The Badshah of Bollywood, Shah Rukh Khan, is ready to step into the space mode for the third time. 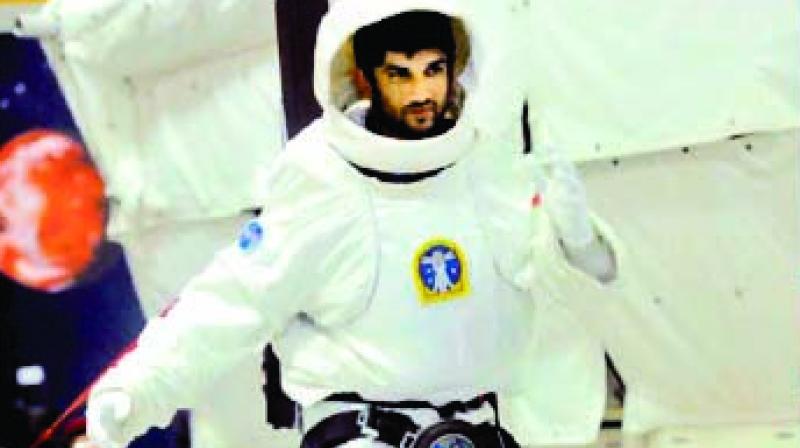 India’s first space film
In the late 60’s when the world was gearing up for the safe and successful landing of Armstrong and Edwin Aldrin on the moon, India was on the verge of celebrating its first space movie Rocket Girl directed by Mahesh Bhatt’s father Nanabhai.

The film starring Naaz, Shammi, Jagdish Raj Bhagwan and Sudesh Kumar was released just a few days before the astronauts landed on the moon.

While Sushant Singh Rajput had an early start by  testing out the space suits in NASA, Akshay Kumar is shepherding the cast of Mission Mangal with Vidya Balan, Taapsee Pannu, Sharman Joshi and Nithya Menen for director Jagan Shakti.

We also have R Madhavan along with Ananth Mahadevan co-directing a bilingual film Rocketry - The Nambi Effect in Tamil and Hindi. The film revolves around the life of S. Nambi Narayanan, an Indian scientist and aerospace engineer played by Madhavan himself. Nambi was in-charge of the cryogenics division and falsely charged with espionage and arrested in 1994. A few years later the CBI and the SC declared him ‘not guilty’.

Meanwhile, the Telugu film Tik Tik Tik released to a critical response and Varun Tej’s Antariksham with Aditi Rao Hydari is already making waves as another space film in the Tollywood.

CMDK back on track
For a while it was being speculated that the Sushant Singh Rajput-R MAdhavan and Nawazuddin Siddiqui starrer CMDK was shelved, but that’s not true. A source close to the development of the film says that the finances for the film are more or less in place and the film will roll in mid-2019.

Sushant’s look in the film was being talked about a lot when he visited NASA to try out the suit and the logistics. We have also been informed that barring Sushant, there will be some changes in the star-cast.

So, who wears the space suit first in Bollywood - Shah Rukh Khan or Sushant Singh Rajput remains to be seen.
— Sanskriti Media