The film marks the Bollywood debut of Alaia and her mother couldn't be happier. 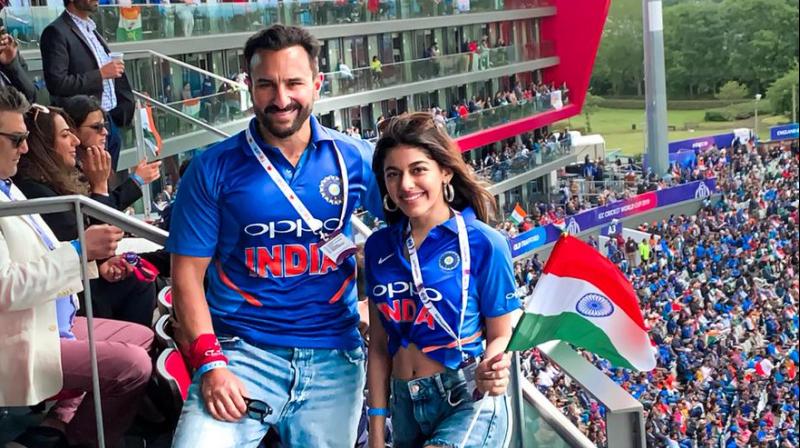 The film marks the Bollywood debut of Alaia and her mother couldn't be happier. Pooja shared a heartfelt post on her Twitter handle wishing her daughter good luck while also revealing that the shooting for the film kick-started today.

"My daughter Alaia with Saif Ali Khan at the world cup match in London. Perfect start to their shoot together for her Debut film Jawaani Jaaneman. He plays her dad and this was shot on father's day. Best of luck for beautiful new beginnings," she wrote along with a picture of Alaia with Saif from India's match against Pakistan at the ICC World Cup 2019 on Sunday.

My daughter Alaia with Saif Ali Khan at the world cup match in London. Perfect start to their shoot together for her Debut film #jawaanijaaneman . He plays her dad.. and this was shot on fathers day. Best of luck for beautiful new beginnings. ❤❤❤ pic.twitter.com/6oez34wRXQ

The upcoming movie is being directed by Nitin Kakkar, the filmmaker behind 'Notebook', 'Mitron' and 'Filmistaan'. Produced by Jackky Bhagnani's Pooja Entertainment in association with Saif's Black Knight Films and Jay Shewakramani's Northern Lights Films, the movie will release on November 29, this year. 2019 is turning out to be a busy year for Saif. Apart from this film, the 48-year-old actor is currently busy preparing for his role as a 'Naga Sadhu' for his upcoming film 'Laal Kaptaan'.

He will also be seen essaying the character of cop Sartaj Singh in the second season of the much-awaited crime thriller web series 'Sacred Games 2'. His character in the series is on a mission to uncover a terror attack in Mumbai in 25 days.

Saif will also be seen in 'Taanaji: The Unsung Hero', which also features Ajay Devgn. He will also appear in 'Dil Bechara', which also stars Sushant Singh Rajput. The film is the Hindi adaptation of 'The Fault In Our Stars'.

Tabu was last seen in the rom-com 'De De Pyar De' where she shared screen space with Ajay Devgn and Rakul Preet Singh.