Exclusive: My mother cultivated cinema in me since childhood, says Ishaan Khatter

Another star kid on the block, Ishaan Khatter will mark his debut with Majid Majidi's Beyond The Clouds. 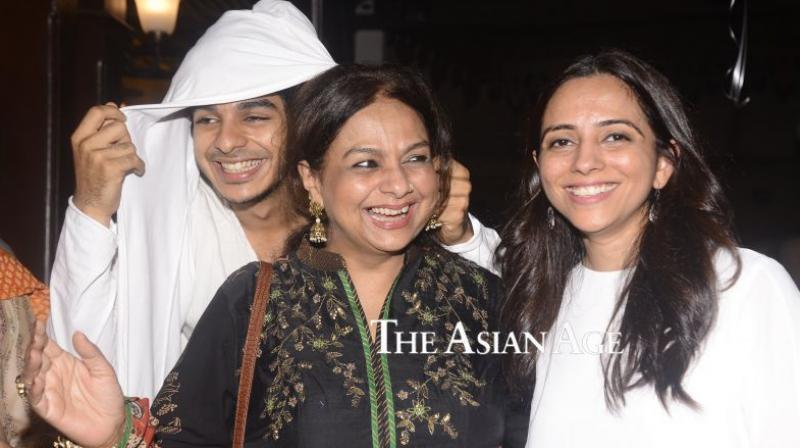 Ishaan Khatter with his mother Neelima Azim at 'Beyond The Clouds' promotions. (Photo: File)

Another star kid on the block, Ishaan Khatter is all set to mark his debut with Iranian filmmaker Majid Majidi's latest offering Beyond The Clouds. Hailing from a film family, the debutante has always fascinated acting on a big screen. In a candid chat with The Asian Age, Ishaan talks about his debut, his dreams and passion, his equation with his brother Shahid Kapoor, working with Janhvi in his next Dhadak and more. Excerpts:

Are you all set for the starry life ahead of your debut release?

I am not really thinking that far ahead. I am just happy that I have arrived at this time and will be sharing my film with the audience soon. We have travelled a fair amount with this film as it has been shown in several film festivals. There is a lot of anxiety and it doesn’t come with the place of overconfidence rather it comes with that faith which I have in Majidi sir and the film he has made. It feels really great!

What was challenging about your role in Beyond The Clouds?

The character Aamir is about 18 years old. I had an eventful childhood and there are a lot of aspects in my role that I could connect to especially emotionally. I prepared for few things which didn’t define me as a person. I would like to say misery is just one part of the film highlighted in the trailer but the whole film is not miserable. It is not a sad film but much like life. There are various emotions and twists that characters go through. It is a very visceral and cinematic film.

How far your life would have been different if not debuted with Beyond The Clouds?

I feel my journey would have been fairly different. I also understood before we began the film that my debut film is going to influence me. It has also set the tone of the films I will work on hereon and my identity as an artist. I am more than glad that I got this opportunity and I did this film. I think it is a no-brainer that few films leave a mark on you and it feels great that I am a part of one such film.

And all set for Dhadak?

I am too excited for it. My co-actor Janhvi is joyous on the sets. She is as much in love with the film as I am. We had a great time while shooting for it.

So you wanted to become an actor always?

Yes. I have always been passionate about dancing and acting and before I was passionate about it, I was fascinated by it. Cinema, music and arts culture have been an integral part of my household especially because of my mom (Neelima Azim) as she has cultivated in me since a very young age. I grew up with a deep regard for cinema. Most of my identity and personality is borrowed from cinema from all over the world. I am a traveller by nature and since a long time, I didn’t get the time to travel a lot. A lot of my travel happened through my movies.

Are you scared of being compared to your brother Shahid Kapoor?

I understand why people want to make that comparison. He has a body of work and there are millions fans and followers of his work. I think for a lot of people it is exciting that his sibling is making a foray into cinema as well. There are also few people that dismiss this idea too. There is no question of comparing me with him and when it comes to the two of us, there is a lot of unity and oneness. It doesn’t bother me at all. The truth is that we have grown up under his wing. I lived his journey and learnt so much from him. I felt so proud of him and for the first time when he saw my film, it was like I could give back so much to him.

Did Shahid give you acting tips?

He has always advised me over the years. He has spoken about his own journey to me and he has shared his experiences every now and then when I seek him out.

Are you enjoying the high of paparazzi?

I am not enjoying it since I am not an excitable person. I feel fame shouldn’t necessarily get me going but I understand it is part of the job. Sometimes, it is inconvenient and unnecessarily imposing in your personal life. I hope that good sense prevails and no one turns inhuman.

Tags: ishaan khatter, beyond the clouds