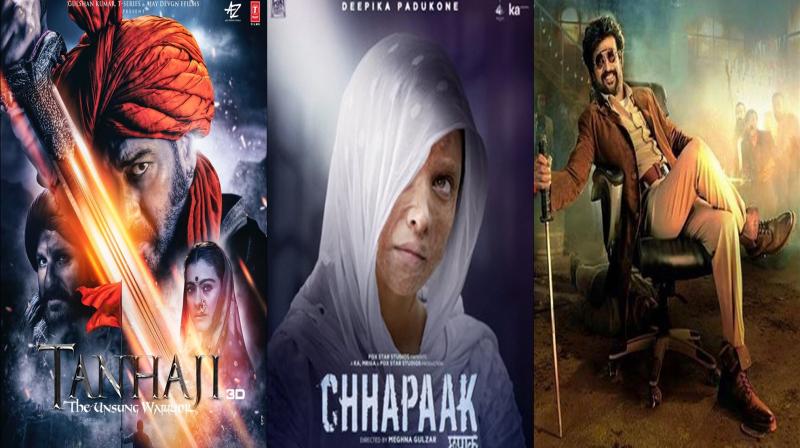 New Delhi: Two of the much-anticipated movies - 'Chhapaak' and 'Tanhaji: The Unsung Warrior' - are set to clash at the box office with both having a release date of January 10, 2020.

Deepika Padukone starrer 'Chhapaak' has been making the right noise among the moviegoers ever since its trailer was dropped a week ago. 'Tanhaji: The Unsung Warrior', featuring real-life couple Ajay Devgn and Kajol was no less in creating a buzz with its action-packed trailer.

Film critic and trade analyst, Taran Adarsh, confirmed the news of the clash between the movies on his official Twitter handle. "Clash CONFIRMED: #Tanhaji: #TheUnsungWarrior versus #Chhapaak versus #Darbar [#Hindi]... #AjayDevgn, #Kajol, #SaifAliKhan versus #DeepikaPadukone versus #Rajinikanth", the tweet read.

'Chhapaak' is based on the life of acid attack survivor Laxmi who was attacked allegedly by a spurned lover in 2005 at the age of 15.

While 'Tanhaji: The Unsung Warrior' is a biographical drama set in the 17th century, based on the life of legendary Tanaji Malusare, who fought alongside Chatrapati Shivaji against the Mughals.