The game is now available on the app store. 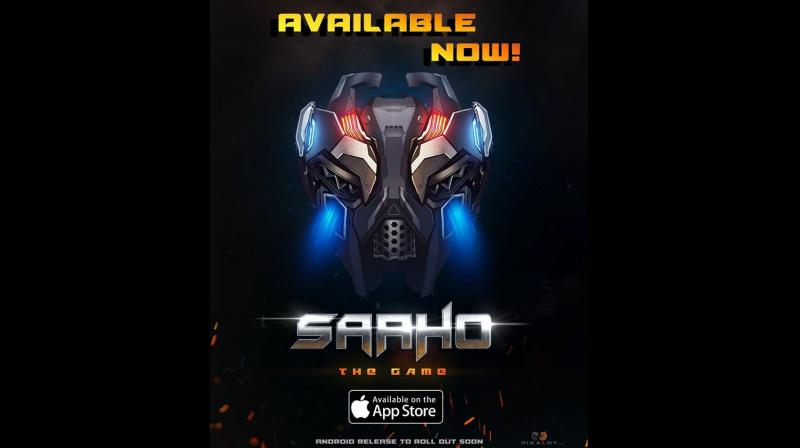 Mumbai: Saaho trailer which has piqued the interest of the audience ever since the bigger than life trailer came out, the makers have finally launched the 'Saaho Game' on 15th August, marking the occasion of Independence day. The game is now available on the app store.

Talking to the social media handle the makers shared, " Get. Set. Boom! 👊🏻‬
‪#SaahoTheGame now LIVE on iOS. To be available on Android soon.‬ ‪(Download Link in Bio & Stories) ‪

Get. Set. Boom! 👊🏻#SaahoTheGame now LIVE on iOS. To be available on Android soon.

After taking the audience on a visual tour of a never seen before 'Saaho Game' trailer, the makers have finally unleashed the 'Saaho Game' on the special occasion of Independence day. After the first look of the Saaho game poster was released, it’s been creating the noise and for all the right reasons! The action packed game which has Prabhas in his Saaho character is looking as suave digitally, as he does in reality. All loaded with his high tech gear, we see Prabhas ready to go on his quest and tackle every obstacle that comes his way.

Keeping an eye on out of box innovations, the makers of Saaho launched an exclusive game based on the movie to excite audiences further. ‘Saaho-The Game’, promises to be an out and out action packed extravaganza to the Saaho fan base. In the game, the player plays the protagonist (Prabhas) cruising around the city, taking down enemies with his arsenal of weapons & a Jetpack! Exclusive rewards await the players, offering them a chance to win Saaho goodies & movie tickets by playing the game.

Hyderabad based Pixalot Labs, a leading game services company in India is the developer of this exciting game and has to be credited for the fun packed extravaganza that the game has to offer.

Starring Prabhas, an actor who enjoys pan India appeal. Paired with Shraddha Kapoor, the movie is being shot in three languages, Hindi, Tamil, and Telugu, simultaneously. The movie also has a superlative ensemble cast of Jackie Shroff, Neil Nitin Mukesh, Mandira Bedi, Chunky Panday, Mahesh Manjrekar, Arun Vijay, Murali Sharma, amongst others- all the more reasons why the delay does deter the spirit of the audience who are looking forward to the release.

'Saaho' is a high octane action thriller which is presented by T-Series, produced by UV Creations and directed by Sujeeth and is set to hit the theatres on August 30, 2019.