Busy promoting her film 'De De Pyaar De', Tabu has mentioned that she is in a happy space. 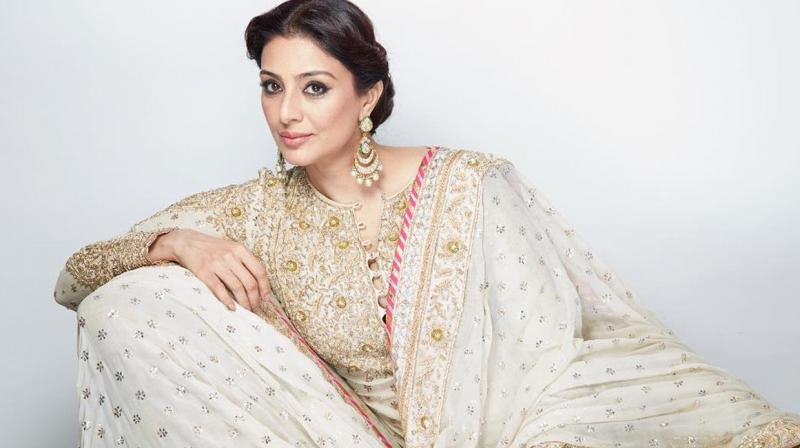 Mumbai: Tabu is one actor who has proved her mettle working in films from all the Indian languages - be it Hindi films, in addition to English, Tamil, Telugu, Malayalam and also Bengali films. She is a personality to reckon with having bagged National Film Award, in the category of best actor. Tabu is one actor who has also pocketed a record of having won four Critics Awards for Bext Actress. In 2011, Tabu also received the highest Government Award none other than The Padma Shri Award. Having begun her journey with a small appearance in the film 'Bazaar’ the Dev Anand’s 'Hum Nauawan', then she went on to bag film in Bonney Kapoor’s production house film titled "Roop Ki Rani Choro Ka Raja".

Tabu got recognition through this film which indeed had flopped at the box-office miserably. There has been looking back for her on the filmy horizon.

Busy promoting her film "De De Pyaar De", Tabu is in a happy space, while we met her recently she immediately says, "So this is the fifth consecutive time we are meeting!"

"I am doing films regularly now, my fans are happy now", Tabu asserts with a smile.

Tabu is no-nonsense kind of a woman. She has maintained her dignified stand always, even though belonging to the World of Glitz & Glamour to this Tabu smiles and gives away her clear opinion, "I do not know what kind of impression I give. But, it’s a fact that I unhesitatingly say,’ Yes” or No”. If I do not like something I will say it. About my thought process, I do not know what the source is. But yes, when you are growing as a child, your personality development gets affected by the people around you. Your family DNA helps your personality development the most. Growing with your family your persona gets affected the most. Also whatever you learn consciously or unconsciously from people around you also effects your personality development. Also whatever you learn from your friends remains with you. Last but not the least it also depends on you as an individual especially- on your temperament and whatever you may have picked up alongside. All in the entire atmosphere you have grown in and whatever you take in finally sets in your temperament as well thus all this forms your individual personality.”

Making of a biopic of the living and the dead is the latest trend will Tabu like to do any sport…or Police officers character on a reel? There was something on sport persona that had come to me. But it did not happen.”

Adding more she says, "You guys say you liked my character as a police officer in Dhrishyam.  I would definitely like to play a lady Singham. You’ll need to tell this to Director Rohit Shetty."

Tabu gives a sneak peek about her interest on being a part of any biopic, "Actually if at all I would be a part of anyone’s biopic first of all the life story of that individual should be interesting, something unusual and inspiring life story will definitely allure me. The strength of that individual should not only inspire me but the audiences as well.”

Can we see you portraying the biopic of the first woman to join the Indian Police Services none other than Kiran Bedi? Pat comes a reply, "But someone should write it and produce/direct it as well."