Guilty: Finally, a Bollywood film that actually gets sexual abuse

Cleverly written by three women, Guilty pulls off quite a feat for rape-ambivalent Bollywood 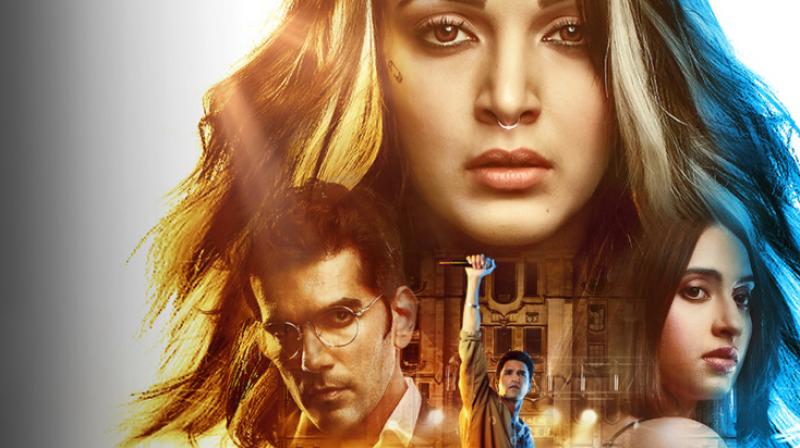 Guilty, a film written by three women — Kanika Dhillon, Atika Chohan and Ruchi Narain, who also directed it — opens with an interrogation and a quick introduction to the way the so-called woke millennials communicate with each other and the world at large: Abusive, crass and always mentioning the unmentionables. Genitals and the rectum, it seems, are always on their mind.

These fragments of conversations offer an insight into how much they think about sex, and how — mostly in aggressive, violent, violating ways. It betrays a worldview that is all too cynical, apathetic almost. It is also posturing — the young, caught betwixt and between childhood and adulthood, are faking manhood with overt machismo. They mistake their sense of haughty entitlement, of having assumed the right to say what they want to whoever they want, as chutzpah.

The talk is around and about an incident on the night of February 14, 2018, at St. Martin’s College, and it involves VJ, or Vijay Pratap Singh (Gurfateh Singh Pirzada), the college heartthrob, lead singer of a band, son of a politician dad and former-model mummy, and Tanu Kumar (Akansha Ranjan Kapoor), a scholarship student from Dhanbad, a girl who was after VJ and would keep throwing herself at him.

It also involves witnesses, students who are friends, VJ’s mostly. Significant among them is Nanki (Kiara Advani), the brilliant, talented, tattooed, slightly unhinged hot babe of the college. She is also VJ’s girlfriend, and the songwriter of their band.

Pretty early in the film we hear the words, 'Me Too'. It’s voyeuristic, gossipy banter about who is getting called out and is almost always followed by derisive comments on the “#MeToo season”. It is meant to minimise its impact, significance, but it exposes a new nervousness and fear -- that it’s creeping close, closer home.

Danish Ali Baig (Taher Shabbir), a lawyer, has been assigned to investigate the case by his law firm that is representing VJ. His job is to explore and cover all loopholes.

Guilty’s narrative style is neither linear nor is it devoted to make us quickly understand what happened, when and how. From the investigation that's being conducted, we get conflicting chunks of information, a disorderly, jumbled recollection of events where slivers of truth are clouded in lies, or denial. Like Danish, we too have to keep an eye on witnesses, piece together evidence, evaluate the stray, snide remarks.

Why would he do it

“It makes no sense… why would he do it?”
"He has a hot girlfriend, all girls wanted to date him. He could get anyone.”
"He is rich, powerful, privileged. Why would he?”

The opposing narrative is about the accuser, the girl, and it’s devoted almost entirely to explaining why she is obviously lying.

“She is a particular type of girl... easy… desperate.”
“She’ll do anything to get attention.”

Her lack of privilege is the reason for her to be manipulative.

“You should see how she dresses.”
“Look at her! Obviously she would lie, for money, attention.”

It’s as if the world is wearing special spectacles with two different lenses — the left one frames a perpetually raised eyebrow and looks at women either with lewd or judging eyes, while the other, right lens, casts a benign eye on the man through its rose-tinted glass.

The accuser is seen as a sex object – an enticement. Her body, her being is a weapon against men. She is also always seen as someone who is showing too much skin, laughing too much, is too free, too bold, too forward, needy, attracting too much attention, and always operating with some ulterior motive. Whatever happened is her doing because she is always in control of her destiny.

The accused, on the other hand, is seen as the victim who was made to, forced to do something. His abusive behaviour, drinking, drugs are seen as harmless stuff that boys do. What he says is believed. His problems, concerns are understood and embraced. He was not in control of his actions. What he did is another’s fault, mostly the woman’s.

Sexual assault, abuse is the only crime in which the victim is stigmatised while the accused is seen as the victim. Why? Because the pivot on which patriarchy spins is misogyny -- mistrust women, trust the men.

And because patriarchy is about power, men simply having power over women is not enough. It must be felt, experienced by exercising it with impunity. That is why, every woman is Maneka, and every man Vishwamitra.

Guilty eventually reveals what happened that night at St. Martin’s, when a music event had been organised, why Tanu from Dhanbad disappeared, and why she later tweeted, from her handle, @tanmanndhan, “#NoMeansNo”.

It also shows the ecosystem in which VJ has grown up — the smaller, intimate one, and the larger one that his mummy-daddy control. They assure him that it’s not his fault. And even if it is, it’s okay. Mistakes happen.

Very quickly other ecosystems -- of lawyers, cops, the college administration, money power -- merge to protect him. And somewhere in these overlapping ecosystems sits the college’s strangely indulgent principal, Dr Roy (Kunal Vijaykar). There is something very creepy about his friendly chatter and his chuckle as he presides over the cruelest joke of all — the Internal Complaints Committee.

Guilty’s main focus, plot wise, is not just on unraveling what happened that night, but also on another student — a woman who is constantly called "special", a “problem child”, whose creativity and brilliance are seen as the reason why she is always so emotional, always exaggerating her feelings.

Intertwined with Tanu’s story is the story of a woman who has been dealing with her demons in her own way. She has devoted herself to protecting VJ, and yet, Tanu's story triggers something inside her.

Guilty is a significant film that has a few flaws, including an unpardonable one of continuity in the film’s key scene. Given that the film is produced by Karan Johar, I’m shocked that he let this huge boo-boo pass.

That said, Guilty is also very cleverly written even if at the end it goes Bollywood filmi.

Its understanding of sexual abuse, of how women dealt with it — pre and post MeToo — and how and why the movement grew, triggering one woman after another, is a feat for our apolitical Bollywood. Especially since Bollywood has tried and is still doing its damnedest to protect all its men accused of sexual abuse, even rape.

It’s very interesting how the film has chosen to show Tanu — as a sexual woman from a small town who puts herself out there, who is driven by her desire and openly pursues men and sex, but consensual. Her characterisation challenges the notion and our need for the “perfect victim”.

Guilty stands with Tanu like a good activist, but its heart really lies with Nanki, the girl who is more “like us”.

Kiara Advani embodies within Nanki at least two characters — the “special child”, the petulant genius, the rebel, the Rhodes scholar, the perfect girlfriend. And over time, as she is forced to shed some of these protective cloaks, and has to face her own vulnerability, we see her true self.

Kiara is quite fabulous and holds the film despite the fact that Guilty has a very talented ensemble of actors. Akansha Ranjan Kapoor doesn’t have many scenes, but she is very good and very powerful. Gurfateh Singh Pirzada and Kunal Vijaykar are good, Manu Rishi and Niki Walia quite memorable, and Taher Shabbir, as the film’s moral force, quite stunning.