Contrary to rumours about trouble in their paradise, the couple was seen enjoying a quiet dinner on Valentine’s Day. 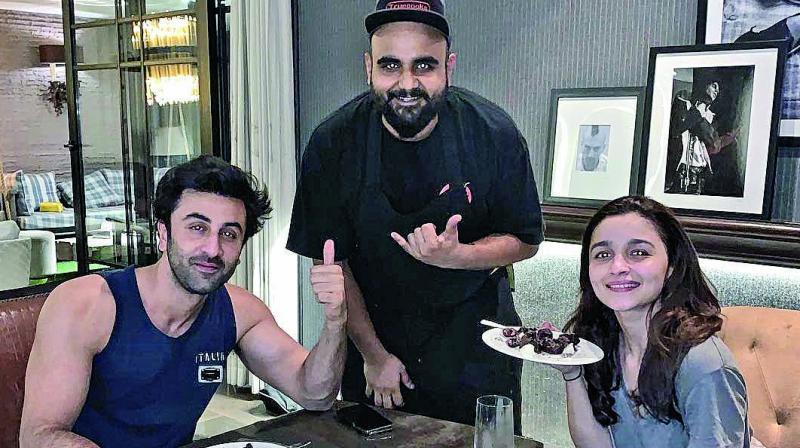 If the grapevine is to be believed, all is not well between Alia Bhatt and her beau Ranbir Kapoor. A video of the couple’s tiff, where a visibly agitated Ranbir Kapoor is seeing arguing with Alia, is making the Internet go wild with many suggesting that Alia find a better boyfriend than Ranbir.  However, a friend of the couple clears the air saying there’s nothing to worry. “There’s no problem between them [Ranbir and Alia]. Their fans are paranoid because of his past relationships and the way they’ve ended. To be very honest, we don’t know which way this would go. But at the moment they are in a comfortable space,” he says and adds that the tiff could be due to her intimate scenes with Ranveer Singh in her film. “Maybe, Ranbir was a little piqued about Alia sharing so many kisses with Ranveer in the film. If he’s playing the possessive boyfriend this time, that’s a good sign. It means he’s more serious about Alia than anyone else.”

And it was indeed a short-lived tiff as the lovebirds were seen celebrating Valentine’s Day with a quiet dinner, whipped up by Ranbir’s personal chef Harsh Dixit. The menu included “a bunch of aphrodisiacs like red chillies, avocado, cinnamon, garlic, asparagus, truffle, salmon, chocolate, cherries, vanilla and lots of love.” The chef took to Instagram to share an image of the couple and shared that it was a “semi cheat meal” but with “zero sugar.”

And when we catch up with Alia Bhatt to ask her about the special day, she refuses to divulge the details and nonchalantly says,  “I was definitely Valentining on that day. Since I’ve been promoting Gully Boy, I had a late night and woke up late on Valentine’s Day. I was flooded with messages and greetings about our film along with some Valentine’s greetings and some marriage proposals from strangers as well,” she laughs. The actress had a busy day, which started with exchanging  ‘positive energy’ with her co-star Ranveer Singh. “Valentine’s Day was also the release day for our film. So we tried to give each positive energy, helped each another get over our anxiety.” She was then off for a very special photo-shoot for her next release Kalank, “I did a photo-shoot for Karan Johar’s film with Madhuri [Dixit-Nene] m’aam and Sonakshi Sinha,” she adds. But why was she spending so much time with Ranveer instead of Ranbir on Valentine’s Day? “There was time for Ranbir also, don’t worry,” she laughs. How does she tell the two similar-sounding names apart? “Trust me I’ve no problem telling them apart. Ranbir and Ranveer are two very different people. Even their names, though they may sound similar to the outside world, they are quite separate in my head and in my speech,” Alia asserts.