Asli pehalvan of the Bollywood ‘dangal’ 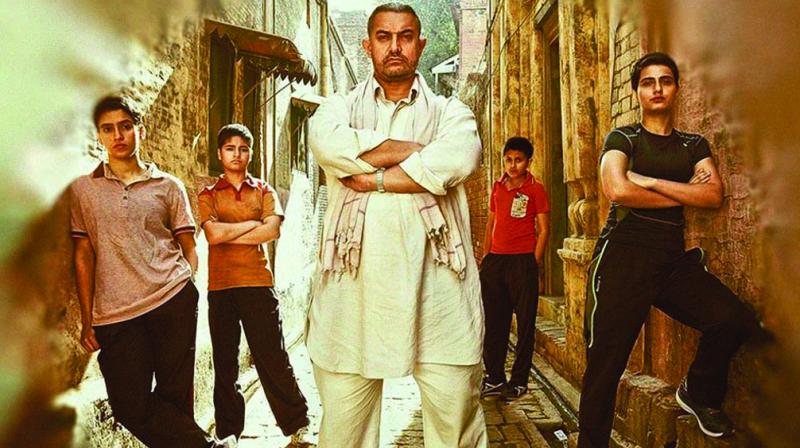 Since his uncle Nasir Hussain’s film, Qayamat Se Qayamat Tak, in 1988, Aamir Khan has not looked back. The line of the popular song Papa kehte hain bada naam karega  from the movie has proved prophetic.

Aamir’s success as a Hindi film hero is unusual. He is neither tall like Amitabh Bachchan nor blessed with Big B’s baritone. None will mistake him to be handsome like Garam Dharam. Aamir never created a frenzy among fans as Kaka did at his peak—his female fans would kiss his car red and get married to his photograph! Aamir never had to open his shirt as has been the case with Salman Khan nor did he ever look into the eyes of his heroine, hold her hand and whisper words promising to keep loving her jab tak hai jaan a la Shah Rukh Khan. Barely 5 feet 6 inches, he does not look a Greco-Roman God like Hrithik. Nevertheless, he not only has survived in the cutthroat rat race of Bollywood for 25 years but also created a niche for himself and earned the sobriquet of Mr Perfectionist!

Although a product of the mainstream Hindi cinema, Aamir has invariably introduced considerable doses of realism in his films to make his characters more believable. Before going under the skin of his characters, he takes great pains to physically resemble them. So, putting on weight (Dangal), building bulging muscles (Ghajini), losing weight (Dil Chahta Hai, Rang De Basanti) is an essential and well thought-out strategy for enacting a role convincingly. His looks, dress, bol, chal, dhal in a film are a part of his endeavours to live a character and make it memorable. On the screen though his acting looks effortless: he is convincing as the vulnerable and love-struck hero in Raja Hindustani; the harassed and anxious suitor in Rangeela; the simple and sincere villager in Lagaan; the hip and trendy youngster in Rang De Basanti and 3 Idiots; and the majestic and proud soldier in Mangal Pandey. Who can forget his endearing tapori act in Ghulam?

Like Marlon Brando, Al Pacino and Robert Anthony De Niro in Hollywood and Dilip Kumar and Amitabh Bachchan in Bollywood, Aamir belongs to the school of method acting — he doesn’t mind as many retakes as necessary until he gets the desired effect. Aamir has been a trendsetter in more than one way. Much before Emraan Hashmi made kissing popular in Bollywood, he had a long kissing scene with Karishma Kapoor in Raja Hindustani. He has consciously fought against getting stereotyped. Almost all of Aamir’s films carry relevant social messages without being preachy. Unlike many of his contemporaries, Aamir never hogs the limelight in films and he allows his co-actors to develop organically for a collective impact.

Dangal is arguably Aamir’s best film, a shade better than Lagaan. Lagaan resonated well globally as it offered some glimpses of the British Raj in India, showcased the immensely popular game of cricket and stressed on universal values like perseverance, hard work, teamwork and battling against odds. It’s an ode to indomitable willpower thus connects with people across nationalities, languages and religions. Dangal, on the other hand, touches an emotional chord in us. It presents a slice of Haryana with realistic ambiance, typical milieu and believable characters. The film not only underlines the fact that girls can be as successful champions as boys but also present the sad state of affairs of our sports academies.

Aamir has set many records: Lagaan was his first film as a producer; it became the third Indian film after Mother India and Salaam Bombay to be nominated for an Oscar in the Best Foreign Film category. His first directorial venture, Taare Zameen Par, won the National award for the best film on family welfare and Lagaan too won the National award, but in the popular film category. Aamir was nominated for the best singer’s category for the very first song that he sang Aati Kya Khanda. He is the only Hindi film actor who has been nominated 17 times for best actor’s award by the Filmfare; he won four times but has yet to attend the award ceremony! His hard-hitting TV show Satyamev Jayate catapulted him to the cover of the coveted Time magazine’s Asian edition.

Although considered serious, selective, choosy and somewhat reclusive, business wise, Aamir has been one of the most successful actors of Bollywood.

Aamir’s body of work in Hindi films unmistakably demonstrates that he is the asli pehalvan in the Bollywood dangal.

The writer is a former Indian ambassador to Libya