Janhvi is currently prepping for Karan Johar's multi-starrer 'Takht', as Sara’s debut film is nearing to its release. 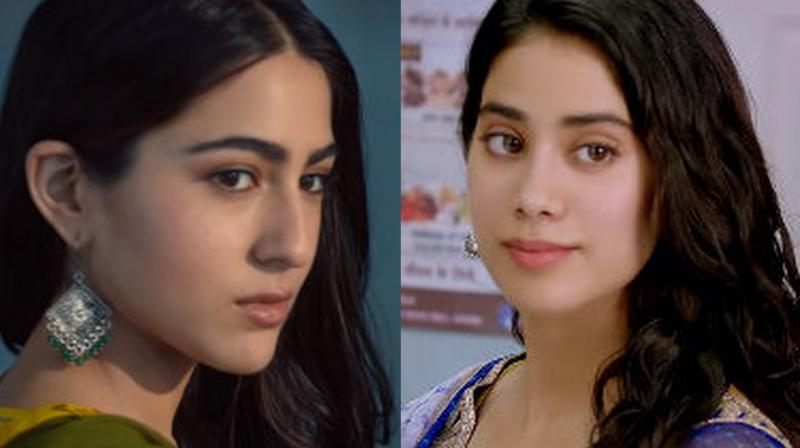 Mumbai: In today’s day and time, films and newcomers have a short span of time at the box office unlike the previous eras where films ran for 25-50 weeks. Due to which it has become a huge risk for any fresh face to get recognition and sustain in the show business. Though star kids get an easy access to silver screen but they also face the wrath of preconceived notions from all across. Audiences’ presumptions on their abilities are the real phenomenon that exists.

This year, Bollywood saw many ups and downs among which one of the most celebrated events was Janhvi Kapoor’s dream debut with Karan Johar produced ‘Dhadak’ alongside Ishaan Khatter. Janhvi got appreciation from the film fraternity and the critics alike for her sparkling screen presence. And now industry is ready to welcome another star kid Sara Ali Khan, who is gearing up for her big Bollywood debut ‘Kedarnath’ followed by Rohit Shetty’s masala entertainer ‘Simmba’ opposite Ranveer Singh in the same month.

Janhvi garnered a lot of attention in the industry with a huge fan following even before the film’s release and her starry image benefited ‘Dhadak’ in every possible manner. On the other hand, Sara Ali Khan looks confident in the trailer of ‘Kedarnath’ which is being received well by the fans but her acting abilities on screen remain to be seen.

‘Kedarnath’ was stalled reporting the issue in dues, post which director Abhishek Kapoor parted ways with KriArj Entertainment. The imbroglio between KriArj and Abhishek not just proved costly, but even almost jeopardised the career of Sara Ali Khan, who makes her debut with Sushant Singh Rajput. 'Kedarnath' is also in the news for allegedly hurting sentiments of religious groups. Post the teaser, it was quite evident that Sushant Singh Rajput plays a Muslim in the film who loves a Hindu girl played by Sara Ali Khan. This became a problem for a few people who objected that the movie highlights Love Jihad. Some people have also demanded that the film should be banned. This rises a question - Will Sara's debut be as smooth as Janhvi?

Janhvi is currently prepping for Karan Johar's multi-starrer period drama 'Takht', as Sara’s debut film is nearing to its release.