The lovebirds tied the knot in a Konkani ceremony on Wednesday which stretched for over five hours. 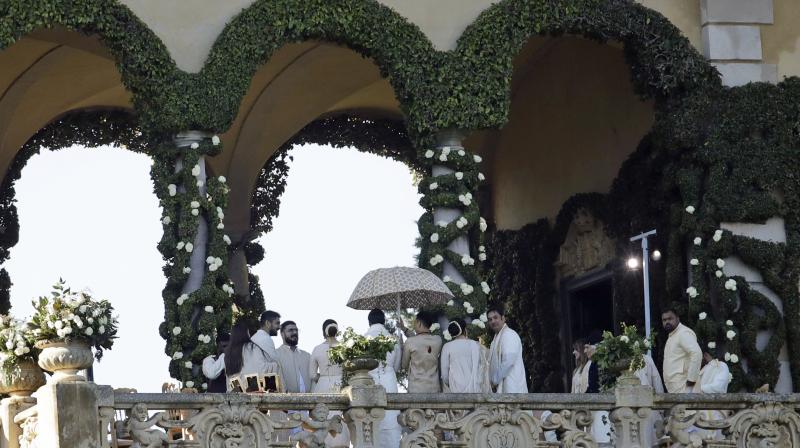 Rome: Keeping details of their much-awaited nuptials under wraps, Bollywood's power couple, Deepika Padukone and Ranveer Singh, is all set for a traditional Sindhi wedding ceremony to be held today.

The lovebirds tied the knot in a Konkani ceremony on Wednesday which stretched for over five hours.

Today's ceremony will take place in the lower terrace of the Villa del Balbianello in northern Italy, the same place where the couple was announced man and wife yesterday.

Keeping up with Ranveer's hot-blooded personality, the lower terrace and the mandap of today's venue are decorated with red roses. According to local sources, a number of large boats have already left for the luxury Casta Diva resort to pick up the wedding guests and the couple.

For yesterday's Konkani ceremony the world famous upper patio was decorated with hundreds of white roses. The couple was surrounded by friends and family members dressed in white attires on the villa's famous patio overlooking the scenic Lake Como.

At the same time, a number of large boats were present at the villas main peer in preparation to take the guests back to the luxurious CastaDiva resort across the lake from the Villa del Balbianello.

Bollywood's 'Bajirao' and 'Mastani' have been inseparable since Sanjay Leela Bhansali's 'Goliyon Ki Raasleela' that was released in 2013. They had announced their wedding on October 21 after dating each other for quite a while.