Chota Naidu kisses Kajal Agarwal on stage, she laughs it off

Cinematographer startled the actress and the audience with his sudden public display of affection. 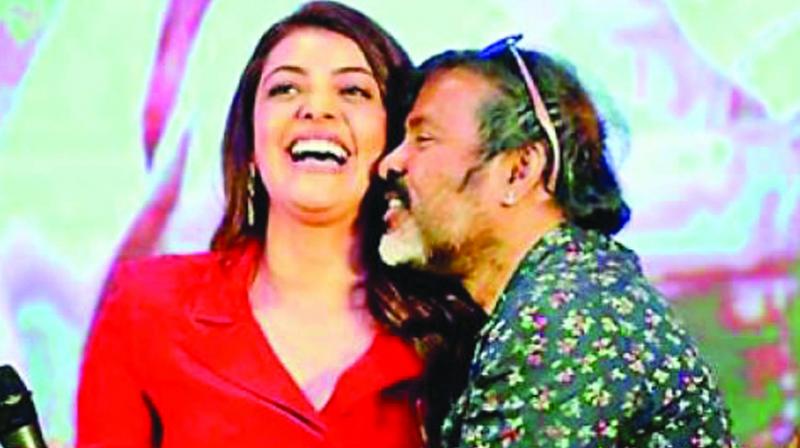 Kajal Agarwal and cinematographer Chota on stage at the film function

Just two days back, leading actor Allu Arjun said that the Telugu film industry gave its actresses utmost respect. And now an incident involving actress Kajal Agarwal and top cinematographer Chota K. Naidu — where the latter suddenly kissed her on stage — has got everyone talking.

Kajal Agarwal is the female lead in the film Kavacham that stars Bellamkonda Sai Sreenivas and has Chota K. Naidu onboard as cinematographer. The teaser launch of this film was held at a hotel in Hyderabad and was attended by the film’s cast and crew. At the event, Kajal spoke about the film and praised its cinematographer Chota. She said she was happy to be working with him again and went on to take his hand. In an unexpected move, the cinematographer suddenly kissed the actress, which caught her by surprise. But she laughed it off, saying, “Small (Chota) it’s fine. Small (Chota) is like family to me.”

The moment happened in a flash, but the video has gone viral. Present on the dais was another actress Mehreen Pirzada, along with lead actor Sreenivas and many others. Since Kajal didn’t seem to mind, nobody is commenting on Chota’s inappropriate behaviour.

But Chota clarified, saying, “It’s always been my pleasure to work with Kajal Aggarwal. She has been one of my favorite actresses after the late Soundarya. I have worked in number of films with Kajal and we know each other for several years. We share a wonderful bond and she treats me like her family. Yesterday’s situation was really a celebrating time for all of us. She also shared some news about a wonderful project she has signed recently, so the peck was just about admiration and appreciation for the kind of great work she has been doing. It’s a very normal reaction.”