Priyanka Chopra’s next launches in London

The Sky is Pink is bankrolled by Ronnie Screwvala and is being directed by Shonali Bose of Amu fame. 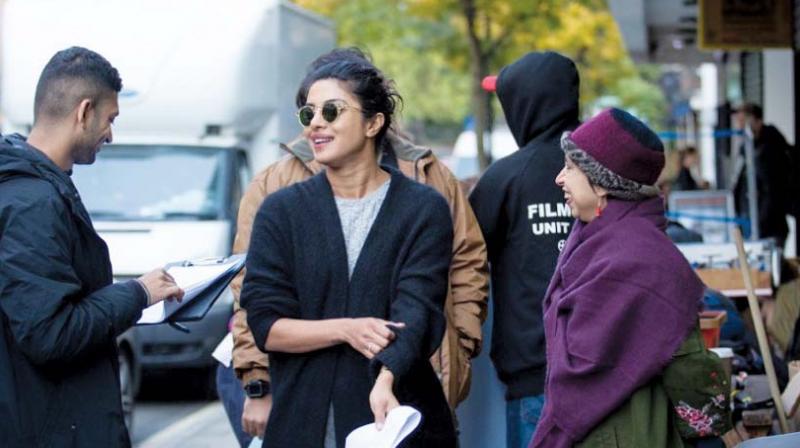 The actress was spotted rehearsing her lines.

Priyanka Chopra’s The Sky Is Pink was officially launched on Saturday and the film’s heroine, Priyanka Chopra, director Shonali Bose and producer Siddharth Roy Kapur were spotted on the streets of London commencing the film’s shoot.

Priyanka Chopra looked happy as she rehearsed her lines on the streets of old Blighty. She will be playing the role of a mother to a teenager.

“The working title of the film is called The Sky Is Pink. The makers have been asked to change the title because it is too ‘English’ for the Indian audiences,” we are informed. Another source adds, “Priyanka shares screen space with Zaira Wasim and Farhan Akhtar in the movie, which is based on the life of Aisha Chaudhary. Zaira plays the character of Aisha Chaudhary in the film and is playing Priyanka’s daughter, after having played Aamir Khan’s daughter in Dangal. Zaira is 17 years old now. It is indeed brave of PC to pick this role at a time when Bollywood actresses shy away from even playing a mother to a toddler.”

The Sky is Pink is bankrolled by Ronnie Screwvala and is being directed by Shonali Bose of Amu fame.