Watch Manto trailer: It’s a Nawazuddin show all the way in this Nandita Das film

The actor might not look exactly like Manto, but shines when he emotes and delivers his dialogues. 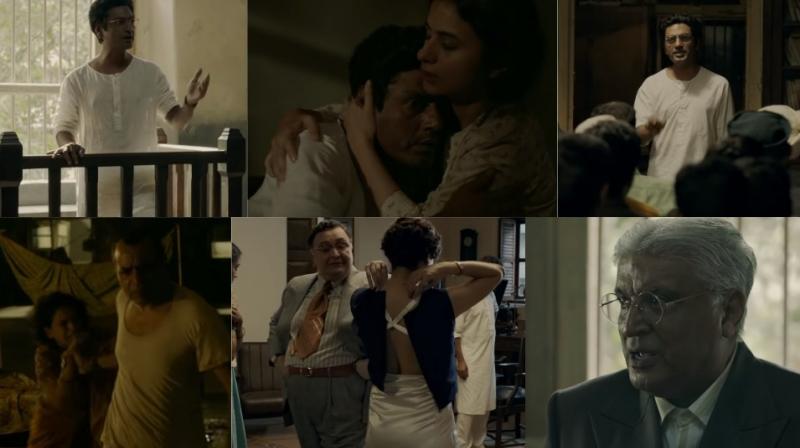 Mumbai: Before his act as Balasaheb Thackeray hits the screens, Nawazuddin Siddiqui will be seen in another biopic of a famous person, Saadat Hasan Manto in 'Manto.'

Unlike the ‘Tiger’ Shiv Sena supremo, this renowned writer is subtler and only his writing is fierce. So much so, that he gets charged with obscenity for his works, which he feels are reflection of society, but also of ‘unbearable’ times, and spends time justifying his writing to the judge in court.

He empathises with women, who are not selling themselves but being gradually bought by people and those who dream of old age knocking on their doors, in his writing. His disgust is evident when Rishi Kapoor’s character asks an actress to remove clothes as it’s a challenging role.

Manto is hopeful of his second child being born in free India, but little did he imagine he himself would cease to be an Indian courtesy Partition.

He continues his arguments and fight despite being asked to be a responsible writer and taunted by wife about dying hungry because of him.

Nawazuddin might not look exactly like Manto but shines when he emotes and delivers his dialogues about today’s murderers writing history with ‘lahu’ and loha’ or curbs on creative freedom, saying ‘tear the pages you don’t like.’

He is equally effective with the pen in his hand and alcohol, cigarette at the same time.

Nandita Das’ film might bring to your mind some moments from her first directorial ‘Firaaq’ and ‘1947: Earth’ too.

Some veterans feature in the film too, Paresh Rawal, Gurdas Maan and Javed Akhtar and is completed by Rasika Dugal, Divya Dutta, Tahir Raj Bhasin, Tillotama Shome and Shashank Arora.

‘Manto’ was lauded at Cannes this year and is releasing on 21 September.