Entertainment   Bollywood  15 Jul 2018  Even before debut in Dhadak, Sridevi’s daughter Janhvi Kapoor thinks she can be PM
Entertainment, Bollywood

Even before debut in Dhadak, Sridevi’s daughter Janhvi Kapoor thinks she can be PM

The tragedy of losing Sridevi still hasn’t passed, and her daughter Janhvi Kapoor will debut in 'Dhadak' soon. 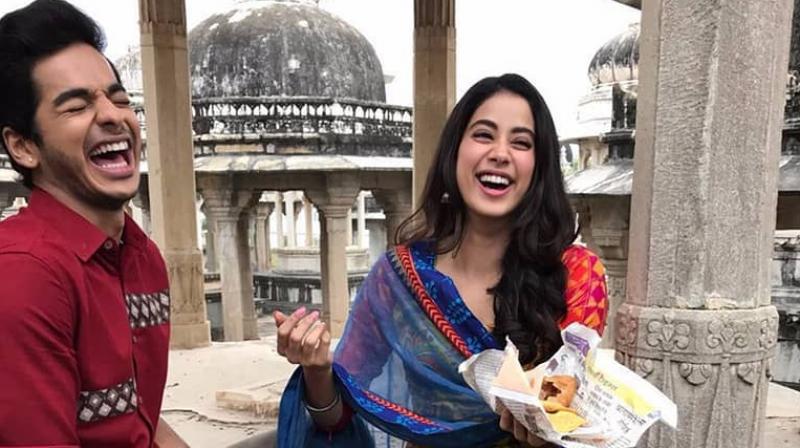 Ishaan Khatter and Janhvi Kapoor in a still from 'Dhadak'.

The tragedy of losing the iconic female superstar Sridevi still hasn’t passed, and co-incidentally, her daughter Janhvi Kapoor is all set to foray into Bollywood soon.

‘Dhadak’, an adaptation of the Marathi blockbuster ‘Sairat’, which is being backed by Karan Johar’s Dharma Productions, starring, rather introducing Janhvi and Ishaan Khatter, is all set to release coming Friday.

The promotions of this movie are on in full swing – from city tours to magazine launches to gigs, Janhvi and Ishaan are going all out with their film.

During one such promotion, both the young actors played a game - who is more likely to. One question in the game was – who is more likely to become a Prime Minister. Ishaan outrightly refused that he doesn’t have it in him, and Janhvi almost agreed, till she changed her opinion on the same.

The star kid then took the mike and announced, “I think I can be the Prime Minister,” and after a few moments, realizing that she just gave a headline-worthy story, Janhvi corrected herself and said, “Please don’t print this in the newspapers.”

Alas, too late Janhvi. Reading her reaction, both Ishaan and media burst out laughing, and there, ended the game.