Akshay can be seen sitting down on the floor, smiling and hugging his two friends. 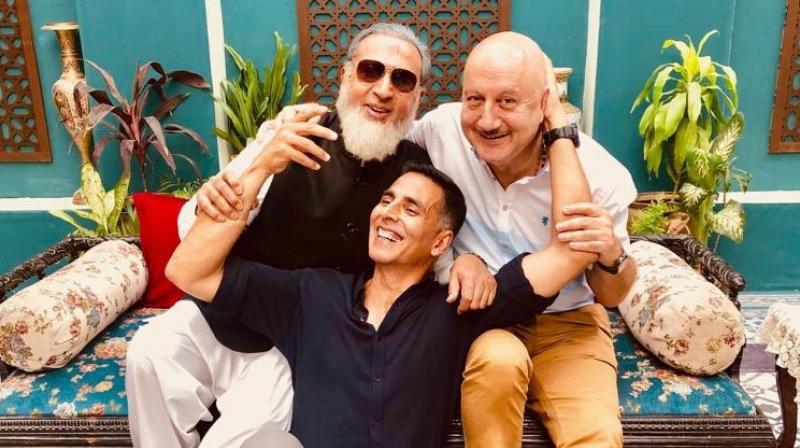 New Delhi: Bollywood's Khiladi Akshay Kumar took his fans back to the 90s era with an adorable picture with Anupam Kher and Gulshan Grover.

Recalling the golden old days, Akshay posted a picture of the trio on his Twitter handle with a beautiful message which read, "I started my career with these two and it's amazing to still be working with them...we've laughed, punched each other, grown up and grown together, Beautiful people who I call friends."

I started my career with these two and it’s amazing to still be working with them...we’ve laughed ,punched each other, grown up and grown together, Beautiful people who I call friends ❤️ @AnupamPKher @GulshanGroverGG #HappyShinyPeople pic.twitter.com/x9eLcyoLwN

In the picture, Akshay can be seen sitting down on the floor, smiling and hugging his two friends.

While it's just not Akshay who expressed his love towards his friends from the industry, Anupam was quick to respond to the beautiful post with his reply. "Feelings are mutual my dearest Akshay Kumar!! Our journey together has been great. I am proud of you and the dizzy heights you have touched. Completely with your hard work and sincerity. Always a joy to meet you. Love and prayers always," he replied back to the post.

Akshay has worked with both the actors in the starting years of his career. The 'Padman' actor and Anupam were spotted sharing screen space in several films like 'Baby', 'Naam Shabana' and 'Special 26'.

Gulshan and Akshay were seen together in films like 'Khiladiyon Ka Khiladi', 'International Khiladi'. Meanwhile, on the work front, Akshay is busy shooting for Rohit Shetty's 'Sooryavansh', the fourth film in the Singham universe where Akshay will be seen essaying the role of Veer Sooryavanshi.

In March, the makers of the film shared the first look of the film and revealed that the flick would be releasing during Eid holiday in 2020. In the poster, Akshay can be seen donning the garb of a police officer with a revolver in his hand.

Apart from this film, Akshay will also be seen in 'Mission Mangal'.