Entertainment   Bollywood  15 May 2018  Race 3 trailer: A Salman show all the way with trademark dialogues, action and family
Entertainment, Bollywood

Race 3 trailer: A Salman show all the way with trademark dialogues, action and family

The movie is the third instalment in the Race franchise and is directed by Remo D'Souza. 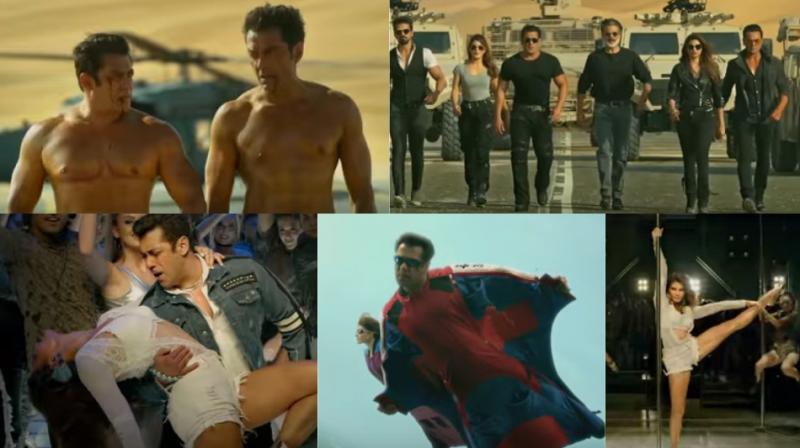 Screengrabs from the trailer of 'Race 3.'

Mumbai: The much-awaited trailer of 'Race 3' is finally out!

And there's no doubt that it will be a treat for Salman Khan fans as he is doing everything that they love him for, be it high-octane action sequences, delivering his trademark dialogues about ‘Race’, and also managing time for some comedy and dance with Jacqueline Fernandez, and most importantly going shirtless in one of the scenes.

All the characters are introduced with a so-called grand dialogue, Anil Kapoor about decisions and anger, Jacqueline about her dhokha and pakka iraada, and Bobby Deol and Daisy Shah about business.

There are guns and explosions all around, be it on bikes, cars, helicopters or even in the air, which only goes on to show the grandeur of the film.

Saqib Saleem cribs about Siku (Salman) to his father Anil about not having any time for them, while Salman is also seen talking about family. Thus one of the taglines, “You don’t need enemies when you have a family,” perhaps gives the best idea about the plot of the film.

This is surely not going to be the Karan Johar-kind of family, and we will have to wait what this Remo D’Souza directorial has in store for us.

The makers of ‘Race 3’ are planning to release the film in 3D along with the usual 2D prints and the film is hitting the theatres on 15 June.