Soha Ali Khan and Kunal Khemu talk about their pregnancy, getting tips from sister-in-law Kareena, pet dog Masti and many more things. 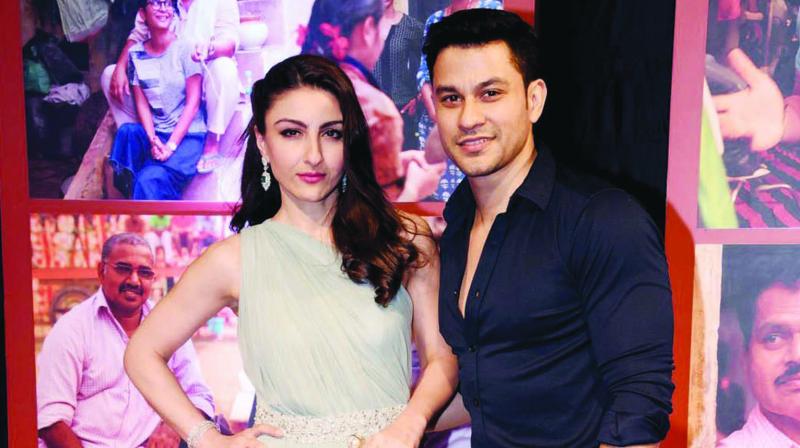 After brother Saif Ali Khan and sister-in-law, Kareena Kapoor Khan became parents to Taimur in December, Soha Ali Khan and Kunal Khemu have given the family more reasons to celebrate by confirming their first pregnancy. The couple who have known each other for almost a decade, speak to us over the telephone to share more about the good news…

“I do not remember the precise reaction (that I had given) when Soha came and broke the news to me… but all-in-all it was filled with a lot of happiness followed by a bit of nervousness but nonetheless exhilarating,” shares the soon-to-be father Kunal about his initial thoughts. But why the nerves, we ask him and he quickly adds, “Nervousness because it (parenthood) is an uncharted territory. I am going to be a dad, Ghosh! But I believe everyone goes through these mixed emotions. It’s an exciting phase.”

His better half, Soha, on the other hand, says that she feels totally shy while talking about the whole episode. “I was ready to have a child and thought that this was the right time to have one. He/she will be our beloved joint production. As I am completely new this experience, I have been feeling awfully shy while talking or discussing anything related to my pregnancy. However, I am tremendously happy.”

Ask them whether they are secretly wishing for a daddy’s girl or mummy’s boy and they smile, “For us, it has to be a healthy child. A boy could be a daddy as well as mummy’s boy and a girl easily a mom and papa’s precious one. We just want a healthy and a happy child. Gender doesn’t make a difference or matter to us, at all.”

While reports suggest that Saif and Kareena have already decided to move to a bigger abode to accommodate a spacious area for their baby boy Taimur, Kunal and Soha are relaxed about their baby’s nursery for now. “Arre, bahut time hai uske liye. We are taking each day as it comes. The nursery will be decided after some time.”

As with any expectant mother, Soha further says that she too has been bombarded with suggestions and do’s and don’ts from her friends and family. “I have been getting a lot of advice and suggestions from left, right and the centre. Eat this, avoid that, gaze at the Moon, drink ample milk, have saffron, sleep in a particular position, so on and so forth,” she laughs. So is she following any or some of it at least? “None, actually!” she laughs again and adds, “I just feel everyone’s body is different and each person’s lifestyle is unique. What may suit you may not be suitable for me. So I have learned to listen to my body but at the same time, I am staying open to suggestions. However, I have decided that I will only do what suits me the best.”

Earlier it was reported that her sister-in-law Kareena has been quite hands-on with suggestions since she has recently gone through all of this.

Probe Soha about the same and she shares, “Yes, that’s right. I keep enquiring her on a daily basis about different stuff. And she has been nothing but helpful. She has shared some incredibly modern diet plans, which she used to follow during her pregnancy. But like I said before, everyone’s body acts and works differently.”

The couple is known to be pet-lovers and has been parents to their furry child — Masti, a nine-year-old beagle. Ask them about Masti’s involvement during this journey and they gush, “Masti will be fully involved in everything that we will be doing and when the baby comes into this world, we are sure that Masti will be accepting the role of an elder sibling, hopefully with all the love that she has in her heart.”

Lastly, Kunal shares that Soha has not been having any mood swing and he seriously hopes  that she stays the same by the end of it too. “Pregnancy changes a woman not just physically but also emotionally. It is important that a mother feels calm and stress-free at all times. This is where husbands can play an important part.” Supporting Bio Oil’s initiative on encouraging husbands to partner with their wives in this beautiful journey, he further adds, “I am trying my best to make her feel like a yummy mummy. I just listen to her, make her feel happy, reassure her that she look wonderful and do things to make her feel good can make her very happy. I also think that she will be an amazing mother.” Also, who is the disciplinarian between the two? “She is the stricter one between us, so I am going to be the pampering one.”