Ask Aamir one bad habit that he has, and he wonders for a while. 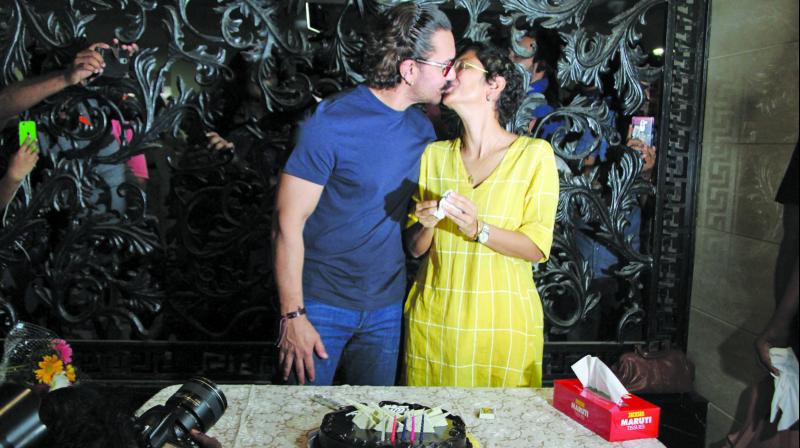 Aamir Khan has always greeted the media on his birthday. As he turns 53 this year, the actor, who was shooting in Jodhpur for Thugs Of Hindostan, came to Mumbai on Wednesday morning to celebrate his birthday.

“I feel good when you all come to wish me every year. Last night, I got to know that I have a two-day holiday on account of my birthday — my director Victor (Vijay Krishna Acharya) has given me two days off! My wife Kiran (Rao) came to surprise me at the airport! I am happy I am getting to spend time with Kiran, Azad (son), and my mother,” Aamir said.

The actor also made his debut on Instagram on the occasion of his birthday. “I am here (in this world) because of my mother. So, I uploaded her image on Instagram first.”

He also said that it was Kiran who got him to use the photo sharing app. “Kiran uses Instagram and she has enjoyed the process and so I thought I will try it too,” he added.

Aamir has been shooting with Amitabh Bachchan for Thugs Of Hindostan and while Big B’s health has been a concern these days Aamir said that he shot with him before flying out to the city.

“He has a problem in the back and shoulder, as he has lot of action sequences in the film. The audience will witness him do action film after a long time. So, definitely it is a challenging film for him. But he is coping up well with him. There are times when you have physical problems. He has an injury on the shoulder and back. Day before yesterday he had lot of problem but he is better now,” he said.

Along with Aamir, Kiran who was also part of the media interaction couldn’t stop gushing about Aamir — there is very little she wants to change about the actor. “I really don’t want him to change. Yes, I keep poking him everyday that he doesn’t spend time with me that he smokes a lot, that he is always working on his phone. But if I actually had to change him I don’t think I would be as happy to see that. I am very happy the way he is,” Kiran said.

“There are too many qualities that I wouldn’t want to change. His sensitivity and intelligence, for which I married him, his deep understanding of people, his sense of caring and empathy for people — these are the qualities that most attracted me to him. Also his incredibly sharp mind and his ability to understand ideas — I really hope don’t change,” she added.

Adding to this Aamir said, “Kiran has been someone, who has been a major force in my life. and I think ever since Kiran has come to my life, there is a change in me. Earlier I used to very serious there is a sense of joy and energy in my life.”

Kiran quickly interrupts him. “That’s not your habit, that’s your personality,” When asked about profit sharing, the latest trend in Bollywood, Aamir is positive on it, “I don’t take just fees. It has been so many years that I have stopped taking fees. So if my films earn less, I earn less. If my films earn more, I earn more.”