The magic of Madhubala

Madhubala looks were so overpowering that most people refused to perceive her as a brilliant actress with impeccable comic timing. 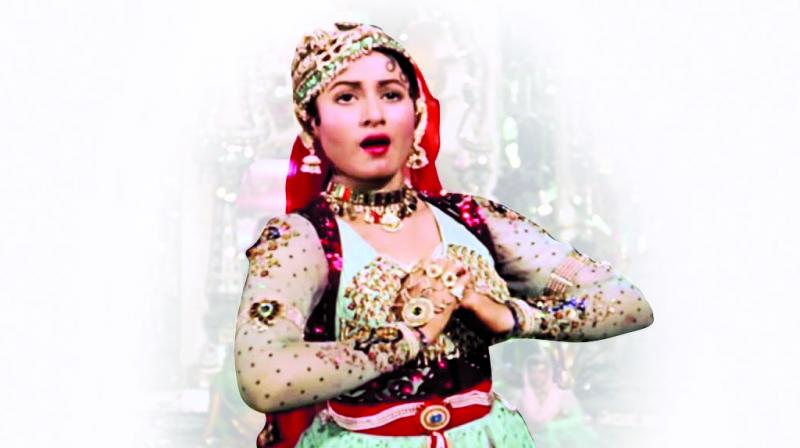 Madhubala, the exquisite beauty of the Indian film industry would have been 86-years-old had death not taken her away prematurely at the age of 36. Hailed as Marilyn Monroe of Bollywood, her infectious smile could launch a thousand ships and epitomised all the grace and feminine beauty that make those flickering images on screen come alive as a collective emblem of the life force. “She was always warm and friendly. Though everyone stressed on her breathtaking beauty, she never took her looks seriously,” recalls Lata Mangeshkar and adds, “She stipulated in her contracts that she wanted only me to do her playback singing. This was after the success of Aayega Aanewala in Mahal (1949). During those days, we’d meet socially quite often. That kind of camaraderie no longer exists… Madhubala mujhe bahut  pyar se milti thi (She would meet me with a lot of affection).” It was Mahal that gave Madhubala the image of an ethereal unattainable yet warm and gregarious beauty who could be diva and devil at the same time.

But her most memorable role is that of Anarkali in Mughal-E-Azam and Pyar Kiya Toh Darna Kya still remains one of the most iconic songs through the years, it won’t be wrong to say that Madhubala’s life was as tragic as her character’s. Like Prince Salim, Dilip Kumar was madly in love with her and wanted to marry her. But her father refused to bless the alliance. In his autobiography the veteran actor revealed that their relationship fell through because her father refused to part with the sole breadwinner of his family. The gorgeous actress was born as Mumtaz Begum on February 14, 1933, in Delhi to a poor Pashtun family and she along with her family moved to Bombay. She was noticed by actress Devika Rani, co-founder of Bombay Talkies Studio who renamed her Madhubala. She started her career in 1942 at the age of nine in Basant. Her first hit as a leading lady was Kidar Sharma’s Neel Kamal (1947).

But her looks were so overpowering that most people refused to perceive her as a brilliant actress with impeccable poignant and comic timing. If she could do the timeless romance so accurately in Mughal-e-Azam, she was also the perfect comedienne in her films with Kishore Kumar like Chalti Ka Naam Gaadi (1958), Half  Ticket (1962) and Jhumroo (1961).

Some of these comedies were shot at a time when Madhubala knew she was dying. She had been detected with a hole in the heart. The doctors gave her just a few years of life. She dragged on living with no one but her husband Kishore Kumar to tend to her in her final days.

The actress passed away in 1969, at the young age of 36, but remained embedded in public memory as the timeless beauty who enthralled audiences in Mahal, Howrah Bridge and of course Mughal-e-Azam where she had to wear heavy iron chains in spite of doctors warning her against such strain due to the heart condition.

Madhubala’s last released film was Jwala with Sunil Dutt in 1970. By then she was already gone. The legend, of course, lives on as do stories of impish personality and incessant giggles from those who had the privilege of knowing her personally.

Late director Yash Chopra had the opportunity to direct Madhubala for his brother BR Chopra’s film in Naya Daur before Vyjanthimala replaced her. He never forgot that brief interlude with her. “She was there for a while…and then she was gone!” he had said, putting his finger on Madhubala’s brief romance with fame and life.  It was the same movie for which she was signed alongside Dilip Kumar, who had fallen in love with her. When Madhubala refused to shoot outdoors due to her failing health, she was dragged to court where Dilip Kumar made a public declaration of his love for the beauteous damsel.  “I will love her until she dies,” thereby pre-empting her inevitable end.