With actors adamant on shooting intense sports scenes without the use of body-doubles, there has been a rise in sports-related injuries in B’wood. 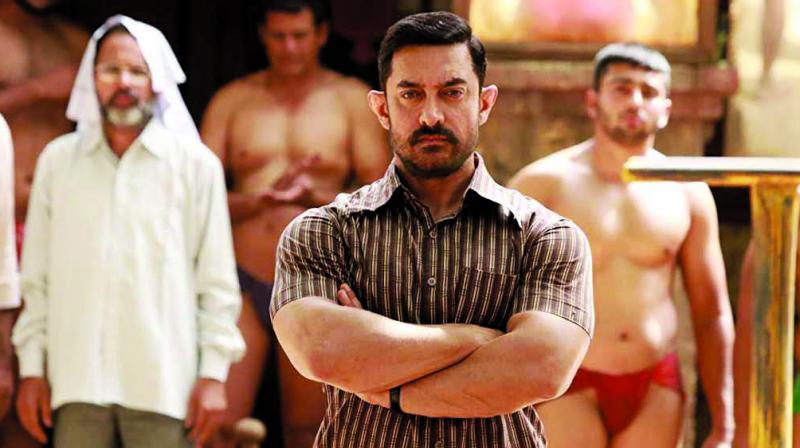 Aamir hurt the rhomboid muscle in his back while shooting Dangal

Shahid Kapoor’s injury during the shoot of Jersey has put a question mark on the kind of injuries that film stars suffer when they are essaying a sportsperson on screen.

Shahid was shooting for his film Jersey, directed by Gautam Tinnauri, in Chandigarh when a ball suddenly bounced from the pitch and hit him on his lip and left a deep gash. Blood spurted out, and soon Shahid was treated by a doctor who put 13 stitches on his lower lip.

The Kabir Singh actor  is one of the many stars in Bollywood who has been injured while playing the game or rehearsing for it in recent times.

There are many films being made in Bollywood where a sport is the main theme of the film, and actors who ordinarily play sports only for fun are playing real sportspersons in the film and are getting hurt while rehearsals, training or shooting.

“I don’t know if Shahid was wearing the right kind of helmet during the shoot, but then fitness is not technique in sports,” opines veteran sports journalist and commentator Ayaz Memon.

Be it a film on wrestling, boxing, cricket or badminton, many stars have been hurt in recent times, which often results in temporary  halts in the shoot of the film.

Another actor, Ranveer Singh, who is playing the role of cricketer Kapil Dev in the film ’83 was not hurt, but Jatin Sarna who plays the role of Yashpal Sharma in the film was in pain when the ball reared up and hit him near his abdomen guard. The guard saved him from a bigger injury, but the said injury had him off the camera for a while. Whereas Pankaj Tripathi, who plays the role of manager Man Singh, injured three ribs in an accident, but thankfully not at the shoot. A lot of actors are very fit these days, but it seems like that’s not enough.

One of the earliest stars in recent times to do a sports movie — Priyanka Chopra played the role of boxer Mary Kom in a biopic on the Indian boxer’s life — was also injured. Priyanka was filming a boxing scene with an actor from the North-East and was hit. She fell on the floor due to the impact. She got the shot spot on, so the director Omung Kumar decided to retain it. The cut mark that one sees on screen was infact real.

Farhan Akhtar who will play a boxer in his upcoming film Toofan for Rakeysh Omprakash Mehra also hurt his hand during boxing rehearsals of the film.

Moving to badminton, Shraddha Kapoor injured her leg on the sets of Saina, and after one more injury on the set, she quit the film with Parineeti Chopra replacing her. The replacement actor also had an injury while practising badminton for the same role. Pari was hurt on the neck and even posted a picture donning a neck support patch.

“Earlier, they used body doubles for their roles. Now, they do their own roles and hence they are at a risk of lot more injury. When you are playing badminton, it is not about your strength. If you jump the wrong way you will get an injury anywhere,” adds Memon.

Recently, even Ranbir Kapoor was injured playing football, but then the actor wore a sling and went off to Manali to shoot for Brahmastra with Alia Bhatt.

Not long ago, Aamir Khan too was injured while shooting for his ambitious film Dangal. Aamir hurt the rhomboid muscle in his back and was off action for around ten days during the shooting of the biopic on the life of Mahavir Phogat and his daughters Geeta and Babita.

Diljit Dosanjh, who played the role of hockey player Sandeep Singh in the film Soorma, had severe backpain after shooting for the film as he had to bend his back all the time while shooting the hockey sequences.

Luckily, insurance has been the best policy for filmmakers. “They won’t stand to lose money because they are covered for all these contingencies and they take an insurance for action and sports film surely even though the premium is
pretty high,” says a trade source.