Entertainment   Bollywood  14 Dec 2017  Virat and Anushka are coming to Mumbai today from Italy? Here’s all you need to know
Entertainment, Bollywood

Virat and Anushka are coming to Mumbai today from Italy? Here’s all you need to know

Virat Kohli and Anushka Sharma together make a total worth of Rs. 610 crore. 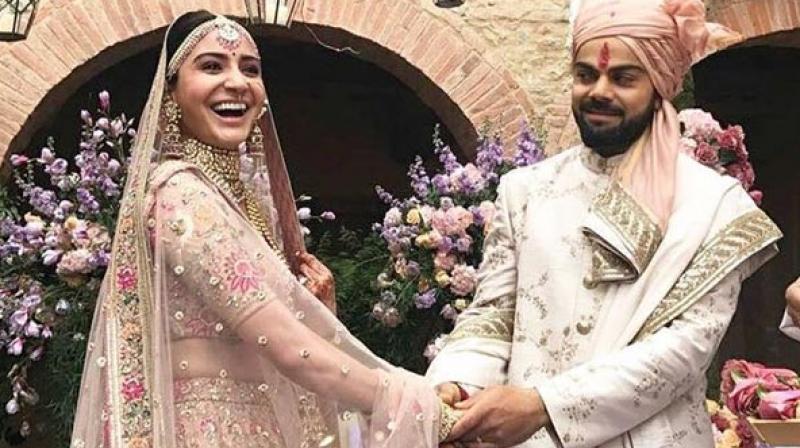 Virat and Anushka at their wedding.

Mumbai: Virat Kohli and Anushka Sharma’s wedding has been an eventful one. It was indeed a memory for everyone including the priest Pawan Kumar Kaushal who told Times Of India that he felt like the ‘man of the match’, as he was responsible for the one-and-a-half-day wedding.

It was surprising to know that Pawan has been residing in Italy for the past 25 years. In spite of that, he too was kept in the dark about Virat and Anushka’s marriage. In fact he didn’t even know that he was booked for an Indian wedding. Kaushal got to know about the Virushka wedding only when he was on his way to the venue.

As the feeling is finally settling in, the couple will now return back to Mumbai from Italy. Yes, they are returning from Italy and not Rome. The duo didn’t have the time for honeymoon because of their hectic schedule.

A source revealed to Bollywood Hungama, “Like the hush-hush wedding, their return is also being kept under wraps as the couple don’t want any paparazzi at the international airport. It’s a late night flight and his manager Bunty Sajdeh and both their families will accompany Virat and Anushka. They will first head to Anushka’s parents home in Badrinath Towers in Andheri, and later to Virat and Anushka’s Worli apartment. There will be some family rituals too, which will take place in Mumbai before their first reception in New Delhi for their relatives on December 21 and the second reception for industry friends and cricketers in Mumbai on December 26. Anushka Sharma’s apartment in Badrinath Towers has been lit up for the last week. The couple didn’t have time to have a honeymoon in Tuscany because of their hectic schedule.”

The couple has however sent out their wedding invitation cards to everyone, including some film industry members. The card is completely eco-friendly as it has a small plant attached, which is quite thoughtful of the couple to do.

Mahesh Bhatt tweeted the same. Here it is:

They made it ! Our heartiest congratulations to Anushka & Virat. We pray that this love story goes on forever and ever. Amen !@imVkohli @anushkasharma pic.twitter.com/dk9sqm4WgU

Popular sand artist also wished Virushka in a grand way. He made a sand art piece for the newly weds, on the beachfront, making it an almost perfect sight to be absorbed in.

Wedding gift for @imVkohli & @AnushkaSharma through my SandArt at Puri beach in Odisha. Wishing both of you happy married life. #VirushkaWEDDING pic.twitter.com/gOExsMaM86

The couple has a net worth of 600 crore combined! As per reports, Virat earns Rs. 121 crore annually, while Anushka demands Rs. 5 crore per film. Virat also receives Rs. 14 crore for a two-month season of the Indian Premiere League. Furthermore, the cricketer mints Rs. 42 crore for brand endorsements, whereas Anushka charges Rs. 4 crore per advertisement. Anushka has a upper hand at investments, maybe because she even has her own production house, Clean Slate Films, along with brother, Karnesh Sharma. While the value of her investments total up to Rs. 36 crore, Virat’s investments are worth Rs. 18 crore. Virat also has six luxury cars worth Rs 9 crore. Anushka’s 4 luxury cars on the other hand cost Rs. 5 crore.

This makes the total net worth of Virat a whopping total of Rs 390 crore, and Anushka’s grand total as Rs. 220 crore. That makes the couple together worth Rs. 610 crore.