The 18th Edition of the IIFA Weekend and Awards began with an official press conference attended by stars on Thursday. 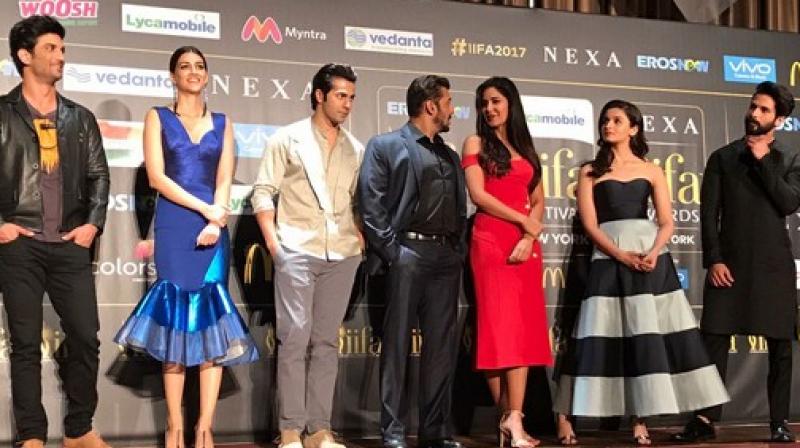 New York: The International Indian Film Academy has commenced in the city here! The anticipation is building as IIFA travels to the United States for the second time.

The 18th Edition of the IIFA Weekend and Awards began with an official press conference held at the Metropolitan Ballroom at the Sheraton Times Square Hotel.
The conference was attended by leading notable figures and members from the media, eminent Bollywood stars Salman Khan, Shahid Kapoor, Katrina Kaif, Alia Bhatt, Sushant Singh Rajput, Kriti Sanon, Varun Dhawan among others were in attendance as they welcomed the biggest IIFA ever in New York.

IIFA inaugurated its festivities by ringing in the Nasdaq stock exchange bell at Times Square, thus marking the globalisation of Indian cinema. It especially rang the bell to announce its support for the Nand Ghar Project, a unique Public-Private-Partnership (PPP), led by Vedanta Resources, which is listed on the NYSE stock exchange, along with the Government of India to transform early childhood care and education centers.

Fans of Indian Cinema can look forward to a host of events kicking off with the music and fashion welcome party- Myntra presents IIFA Stomp at Times Square on July 13.

Bollywood actor Varun Dhawan will be showcasing his DJ skills at IIFA Stomp alongside DJ Amann Nagpal, Electronica icon B.R.E.E.D, DJ Nasha, as they raise the excitement with their unique music. Another facet to IIFA Stomp is a glamorous fashion show right in the heart of the city! Myntra shall present its collection with show-stoppers Bollywood actresses' Dia Mirza and Taapsee Pannu. Leading ladies Shilpa Shetty & Neha Dhupia shall be show-stoppers for Shane and Falguni Peacock collection presented by NEXA and a Jewelry collection will be presented by Gitanjali by designer Sonaakshi Raaj with Huma Qureshi as the showstopper.

In addition, Myntra shall announce the MOGO much logo launch featuring a 10 minute performance by the talented multi-instrumentalist Karsh Kale.

Day one of the 18th edition of the IIFA Weekend and Awards also introduces the first-of-its-kind "Shuruaat Gala" Dinner IIFA Societal Innovation Summit, a charity fundraiser organized by IIFA in association with The Global Education and Leadership Foundation (tGELF) at The Pierre in New York.

As star studded evening, Shuruaat Gala Dinner at IIFA shall bring together the biggest celebrities from Bollywood and leaders from business, philanthropy, media, education and Arts.

As part of the IIFA Weekend and Awards in New York, IIFA and the Federation of Indian Chambers of Commerce and industry announced the FICCI-IIFA Global Business Forum to be held on July 14, 2017 at the Asia Society, 725 Park Avenue.

Additionally, the iconic MetLife stadium shall transform into an unforgettable musical experience at EROS NOW IIFA Rocks on July 14 with the multi-talented Bollywood star Diljit Dosanjh kick-starting the performances. A never-seen-before medley and energetic performances from Hariharan, Kailash Kher, Mika Singh, Mohit Chauhan, Seshadri and Kamaal Khan among others will be seen with the legendary artist A.R. Rahman at IIFA Rocks. Bollywood's Riteish Deshmukh and Manish Paul will host the sensational global event.

The final event of the weekend is the NEXA IIFA Awards co-presented by Eros Now Powered by VIVO, a spectacular and glamorous night which honors and celebrates excellence and deserving work in Indian cinema will be held at MetLife Stadium on July 15 featuring Saif Ali Khan and Karan Johar hosting the star studded night with dazzling performances by Bollywood megastars Salman Khan, Alia Bhatt, Katrina Kaif, Shahid Kapoor, Sushant Singh Rajput and Kriti Sanon, to name a few.