Kangana Ranaut's 'Manikarnika' too was slated to hit the screens then, but there has been no update on that. 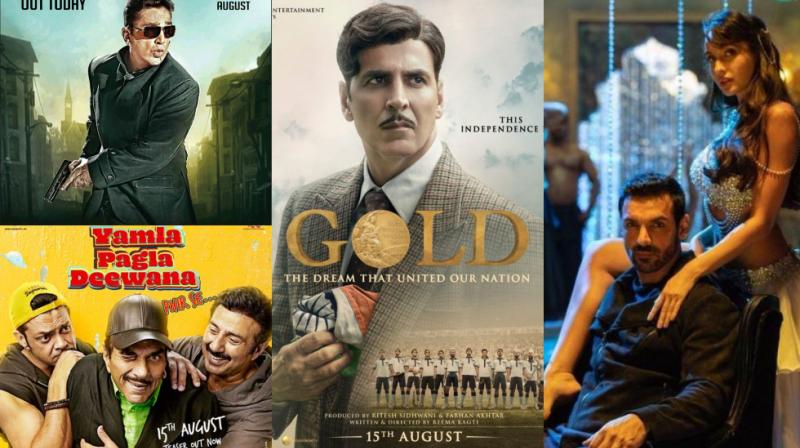 Earlier news reports stated that John Abraham ‘Satyameva Jayate’ and Akshay Kumar's ‘Gold’ will face-off at the box office this Independence Day but now it looks like one more movie is ready to compete with them. That movie happens to be ‘Yamla Pagla Deewana Phir Se’, the teaser of which released some time back.

Among them, John and Akshay are close friends, who have worked together in films like ‘Garam Masala’, ‘Desi Boyz’, ‘Housefull 2’ and ‘Dishoom’.

When asked about the clash, John told reporters, "Akshay is an actor in 'Gold' and I am an actor in 'Satyameva Jayate'. So that (the release of films), is a producer decision, between Excel Entertainment and T Series. Akshay is my senior – I love him and have always wished the best for him. I am sure he will also want the same for me."

John was speaking at the success press conference of ‘Parmanu: The Story of Pokhran’ here last night.

The Abhishek Sharma-directed film turned out to be a sleeper hit, earning not only good reviews but also did decent business at the box office.

The actor, however, is aware about how to handle compliments and criticism.

"It's cyclical. If your one film does good, people laud you for it. You get bouquets. But if your film doesn't do well, you get brickbats instead. So I think we are old horses at this. We know what goes on in people's minds," he said.

When asked how he would react if the movie finds a spot at next year's National Film Awards, John also said he hopes the film makes it to the prestigious tally.

He, however, added, "But, it's too early to talk about our chances of winning a National Award. We are not overconfident. We think we will deserve whatever the jury decides for our film but at the same time I think people loved the film and that is important for us."

Kamal Haasan starrer 'Vishwaroop 2' also release on the same day and Kangana Ranaut's 'Manikarnika' too was slated to hit the screens then, but there has been no update on that yet since the film might be getting delayed due to pending post-production work.