Aamir turns 53: Kiran kisses, stays with husband as he celebrates birthday with media 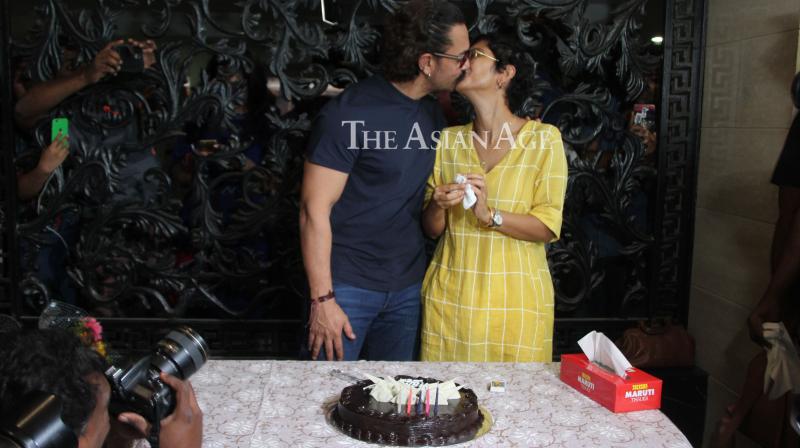 Aamir Khan and Kiran Rao at the superstar's birthday celebrations with the media.

Bollywood's Mr. Perfectionist Aamir Khan rang in his 53rd birthday with fans and close friends from the media. The superstar who is currently busy shooting for his next mega project 'Thugs of Hindostan', took a break from Rajasthan schedule to celebrate his special day with near and dear ones.

The actor cut the mandatory birthday cake along with his wife Kiran Rao and shared some moments with media people at his Carter Road residence in Mumbai. The actor said, "I'm grateful to my director Victor (Acharya) who allowed me to take a break for two days. I'm happy spending my birthday with my son Azad, Kiran and my mom, like every year."

Aamir's wife Kiran went to receive him at the airport to wish him on his birthday. He lovingly kissed his wife, a sweet gesture like never-seen-before. Kiran stood by Aamir’s side throughout the birthday celebrations with the media, which is rather an unusual gesture noticing that Aamir celebrated his birthday alone over all these years. She even shared heart-warming thoughts on her ‘beloved’ husband saying, "He is a great husband, father and son. What I also like about him is his great intellect and sharp creative intelligence."

It is quite interesting to note that Kiran and Aamir deliberately came in media's limelight amidst their separation rumours, and they even went on to show their intimate moments on camera for the first time in all these years that Aamir celebrated his birthday.

The separation rumours began when Aamir was rumoured to be dating his younger co-star, but the kiss might just put all speculations to rest.

Interestingly, Aamir made his Instagram debut today, by sharing a picture of his mother. He said," Kiran is quite fond of social media especially Instagram, so I thought of it too. I posted my mother's picture on my birthday because she brought me to life and that's very special to me."

On speaking about his Thugs co-star Amitabh Bachachan, who is news for health issues, Aamir said, "it's an intense shoot. There's is a lot of action involved in the film and Amit ji is doing very well in this scenes. There was some pain in his shoulders couple of days back but he is fine now. In fact, he was the first person to wish me on my birthday last night."

"We were shooting for a scene when I lost the track of time, at the stroke of midnight Amitji took a mike and in his signature voice said Happy Birthday Aamir," he added.

On asked whether he would return for another season of Satyamev Jayate he promptly said, it would be great but currently the entire team of the show is working on water conservation initiative Paani Foundation. Me and Kiran are active participants of the project. It's been three years working on it. We shall put a special show on Marathi channel to highlight the issue."

Speaking of his future projects Aamir said, "I'll let you know about it at the right time."

Aamir concluded media interaction by thanking everyone for the warm wishes.