Movies, through the looking glass

The world has viewed India through the colourful lenses of movies. A film festival talks about the changing face of Indian cinema. 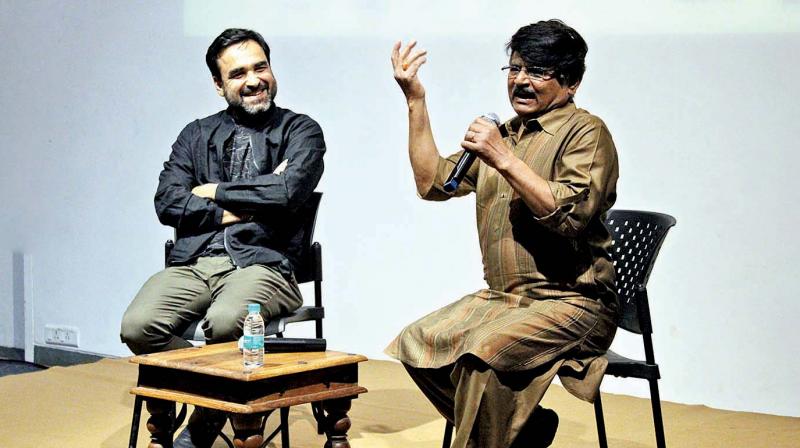 Pankaj Tripathi and Raghubir Yadav at the screening of Newton.

They say art imitates real life, but an addendum to that is the fact that it can fast become an identity of a community, a society or — indeed — a whole country.

In order to understand how the movies become a window to changing perceptions, and how the world views India through cinema, director and screenplay writer Anuraadha Tewari has curated a film festival, which kicked off on Friday.

The festival, titled India and the World: The Changing Narrative is part of the Chhatrapati Shivaji Maharaj Vastu Sanghrahalaya’s month-long exhibition, around India. The festival was kickstarted by director and producer Anurag Kashyap, who emphasised on the need of striking a balance between indie cinema and commercial movies in Bollywood.

“Here’s the thing that I realised in my years in the industry,” said the filmmaker, who is out with his latest Mukkabaaz. “It’s the bigger, out and out commercial movies that producers like Eros release that generates funds for the kind of movies I do.”

Anurag reminded the crowd gathered to watch Newton, the opening movie of the festival that has been accruing laurels and awards in the film festival circuits abroad. “We’ve all heard of Newton when it became India’s official entry to the Oscars. It may have crashed out but don’t forget it won the Berlin International Film Festival,” he said. “Indian movies have been winning most major awards abroad. And to support cinema like this, I make it a point — and I think all of us should — to buy a ticket, or a DVD of these movies.”

It was an interesting twist that Anurag happened to inaugurate the festival before Newton screened, thanks to the controversy around the film’s release. Newton was accused of being plagiarised off an Iranian film called Secret Ballot. “It’s not necessary that a common thought that passes through two filmmakers minds should mean one of them is a plagiarist. Even if Amit (Masurkar, Newton’s director) was inspired by the situation addressed in Secret Ballot, and thought of a similar instance in India, it by no means suggests it’s plagiarised.”

Anurag got himself involved when Newton was hit with plagiarism charges. “Since I’m good friends with the producer of Secret Ballot, Marco Mueller — and I’ve seen both the movies — I got the team of the Iranian movie to watch Newton. They promptly denied it was plagiarised and I put up the screenshots of my conversation on my account,” Anurag said.

Even as Anuraadha reminded Anurag about his initial disdain for Karan Johar and eventual friendship with him, the filmmaker laughed, admitting he had been uncomfortable during the shoot of Koffee With Karan. “Yes, I did have issues with him. But that was before I knew Karan. I would even bash him and his movies on my blog,” Anurag guffawed. “But the more I got to know him, the more I realised his movies are just a reflection of the life he’s had. He’s grown up watching trial shows of movies. He cannot make any other kind of cinema than the one he’s making. And I cannot hold that against him. Not after I’ve known him this well.”

Newton stars Pankaj Tripathi and Raghubir Yadav too were present to address a packed screening hall for the movie. Speaking briefly about the film, the duo shared anecdotes from the shoot of it too.

With movies like Mukti Bhawan, Ajji, Kadvi Hawa and even Bareilly Ki Barfi in the line-up, via panel discussions with stars of the movie, Anuraadha hopes to stimulate minds on the changing face of cinema.