When Akshay Kumar quizzed Sonam Kapoor on her marriage

At an event to promote his film 'PadMan', Akki took a moment to make his co-star uncomfortable with his question. 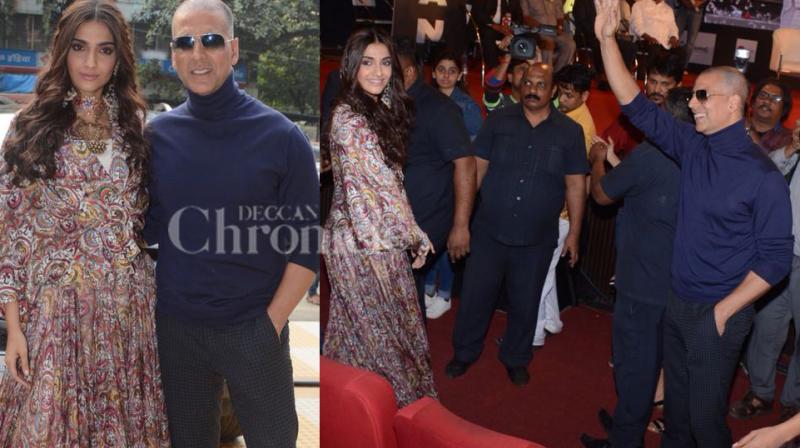 Sonam’s 'PadMan' co-star Akshay Kumar, however, decided to stoke the fire when he asked her, “Are you getting married this year?” (Photo: DC)

Mumbai: There has been a strong buzz doing the rounds that Sonam Kapoor will — in all probability — tie the knot with rumoured boyfriend Anand Ahuja this year. The actress has, however, maintained a stoic silence on the issue.

Sonam’s 'PadMan' co-star Akshay Kumar, however, decided to stoke the fire when he asked her, “Are you getting married this year?”

The two were at an event to talk about inventions and innovators. The organisers were talking about a cooking machine, when Sonam said that she would like to buy it for her mother, since her father Anil Kapoor never allowed her mother Sunita Kapoor to cook. “He didn’t let her much into the kitchen,” she recalled.

As Sonam tried to laugh over the matter in the hope of sliding out of the awkward question, Akshay continued in the same vein. “If you are getting married this year, I can buy a cooking machine for you. I will gift you a cooking machine. So, you can cook or maybe your husband can cook for you,” guffawed the actor.

Akshay had previously invited Sonam and her beau to a party he hosted for Will Smith a year and a half ago.