The cat’s out of the bag

Questions an industry insider, who cannot understand the need for such sudden secrecy in an otherwise public relationship. 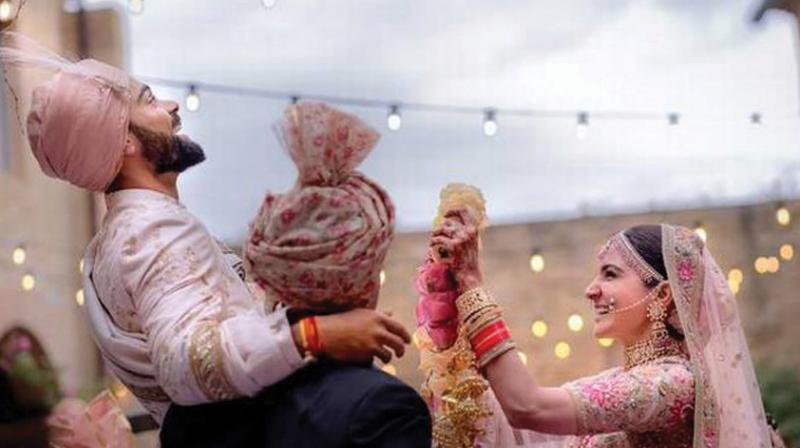 The couple tied the knot in a closed ceremony in Italy, where they had invited only their close family. (Photo: Twitter)

Just as Anushka Sharma and Virat Kohli’s wedding ceremonies came to an end, everything they kept under the wraps was revealed. But what was the idea behind the sudden publicity?

Instead of sharing their Italian wedding journey on social media, celebrity couple Virat Kohli and Anushka Sharma decided to keep it on the low. It was only after the pheras were over that social media was bombarded with the minutest of details — the colour of socks Virat wore, the song that Anushka walked down the aisle to, the engagement pictures, and even what song Virat chose to serenade Anushka with (it was Mere Mehboob Qayamat Hogi).

And this is exactly what stung people from the industry. “For all their social media appearances and all the pictures they have hand-in-hand in the papers, it was quite surprising to us that Virat and Anushka decided to keep their wedding hush-hush to the world. They’ve been quite vocal about their love for each other and have even gone on TV channels to defend each other when questions about Virat’s career or Anushka affecting it were concerned. So, if you’ve not made any bones about being in the limelight as a couple before, why hide the wedding?” questions an industry insider, who cannot understand the need for such sudden secrecy in an otherwise public relationship.

The source continues, “What’s more is that after the denials and the secrecy of it all, the pictures and videos from not just the wedding, but even the ring ceremony and other details were suddenly pushed into the media. That’s all everyone’s been talking about since Monday. They’d have done well to release just one picture from the wedding, a la Abhishek Bachchan and Aishwarya Rai Bachchan, if they were keen on the secrecy.”

Social commentator Pritish Nandy explains the phenomenon. “The couple is following something known as a ‘soft release’,” he begins. “This is where they release details about themselves bit by bit, and only the parts they think is necessary; information they think fit to be released at that time,” he explains, adding that they have decided to disseminate facts about their wedding through handouts and not through independent journalism. “I think it is goes contrary to the purpose of news — it is a disservice to journalism. Although, it might not be intended as that,” he admits. Pritish also points out that this way, nothing will be discussed that will cause them embarrassment.

Consider other celebrity couples who tied the knot in the past couple of years: Kareena Kapoor Khan and Saif Ali Khan, Bipasha Basu and Karan Singh Grover, Shahid Kapoor and Mira Rajput, Preity Zinta and Gene Goodenough, and the very recent liaison of Yuvraj Singh and Hazel Keech — none of them hid behind the veil of secrecy and then flooded social media with the details.

Now that everything is out in the open, other details of their wedding as well as life after it have also been revealed. The it couple is now gearing up to begin their married life in a flat they jointly brought in Mumbai’s posh Worli locale, the Indian-Italian catering service that presented only vegetarian delicacies since the bride is a vegetarian, and other details like Virat looking for the perfect ring for three months, and more.

Even as this has left many people wondering the need to secrecy in the first place, others were rather sympathetic. “When you are that influential, a VIP yourself, how many other VIPs could you possibly invite?” questions Chhaya Momaya, etiquette expert.

Columnist, designer and brand consultant Nisha Jamvwal believes that the couple be spared of this drilling. “I think that they wanted to keep this one day completely to themselves,” she begins. “When you are such public figures, there are still aspects of your life that you want to keep private. That’s probably also why they didn’t share too many photos from their own social media accounts. When the reception in Delhi takes place, they will play their role as public figures and open it up for everyone,” she hopes.