Sonam says Anand tried to hook her up with friend, answers queries on sex life

The actress was a guest on fashion designer Anaita Shroff Adajania’s web show, and made several interesting revelations. 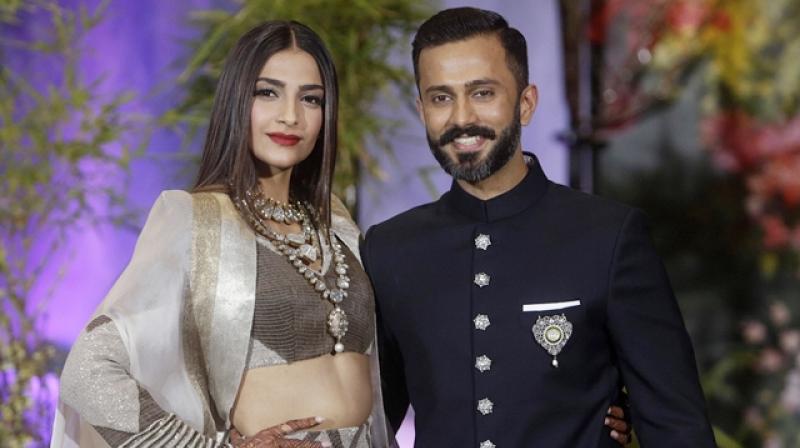 Sonam K Ahuja and Anand Ahuja’s wedding was all over for almost a week in May.

Mumbai: 2018 might go down in history as the year when maximum top actresses get married. Reports of Deepika Padukone-Ranveer Singh and Priyanka Chopra-Nick Jonas’ marriages are doing the rounds, but till then ‘The wedding of the year’ title surely goes to Sonam K Ahuja and Anand Ahuja's marriage, which was a grand affair with the who's who of Bollywood turning up.

But before the couple took the plunge, did you know that Anand had tried to hook up his best friend with Sonam the first time they met?

The actress made the revelation to fashon designer Anaita Shroff Adajania, on her show ‘Feet Up with the Stars’, “He tried to set me up with one of his best friends. So bad. There was a point when people were hell-bent on me being set up with this guy, I’m not going to name him. He is very cute and very nice. He’s still available. But there wasn’t that vibe.

"They basically conned me during the promotion of ‘Prem Ratan Dhan Payo’ to come out for a dinner, I had no idea this boy was going to be there. And I see Anand has come with this guy. And I ended up speaking with Anand the whole evening. That was the first time I saw him and had a conversation with him, Anand was trying really hard because he loves his friend.”

After the interaction, the two eventually fell in love over calls and messages, Sonam revealed.

The other interesting bit is that the entrepreneur had proposed the actress without a ring. Sonam said she initially ignored a probable proposal, a lengthy letter he had written, as he hadn’t gone down on his knees.  Anand had a grand plan to propose at Oxford Library due to Sonam’s love for books. But the eventual proposal was impromptu and on the day they were fighting all day.

The actress revealed that she had lost her sunglasses in NYC and she was so furious she was angry about Donald Trump being President and swore at the citizens, but the ‘Buddha’-like Anand decided that was the right time to pop the question, “We were walking to the hotel, and he just got down from his bike on his knee in the middle of New York streets, “Will you marry me?’ I felt, ‘I was such a b***h all day,’ I said, “Of course. What are you doing?’ I was going down on my knees as well.

It’s a different matter then that Anand later made up for it by formalising the relationship with not one, but two rings.

Moreover, when Sonam took her fitness and diet lightly during their honeymoon period, he loved her even more, “Recently after our wedding, I gained weight because I was on a holiday, eating and not working out, but he said, ‘You’re looking like an anjeer (fig), it’s so cute.’ I told him, 'Firstly, I hate anjeer, and don’t promote this size. I am still acting, I need to look hot also.'”

Anand officially asked Sonam’s hand for marriage, and the actress added that her father Anil Kapoor loved him right from the beginning, though he’s been antagonistic over her ex-boyfriends in the past. Her mother Sunita loved him because he was ‘well-educated,’ while convincing her siblings was a cakewalk as Harshvardhan was bribed with sneakers by the owner of the sneaker brand, and Rhea was already fond of the shoes they made.

The actress also spoke on her wedding and when asked about the most drunken dance at the event, she replied, “Salman and Shah Rukh didn’t leave the stage and dad also took over it.”

She added it was ‘cute’ to see the two superstars serenading her mother, and she was happy to see her relieved after the events got over.

And she also said speeches were banned for the wedding, and Ranveer Singh and Arjun Kapoor’s ‘rap speech’ was all ‘rubbish.’

Sonam also said Anand today is her sleeping pill and she gets better sleep if she’s with him.

At the rapid fire question towards the end, Sonam answers several 'bedroom questions' as well like wearing pajamas or nothing to bed and her corsets are  ‘kinkiest’ thing in her wardrobe. She chose orgasm over foodgasm, not-so-quickie over quickie, lights on over off, dirty talk over role play and that she’d prefer neither hand cuffs nor blind folds.

When Anaita asked her about her favourite fantasy role play scenario, she replied, “I haven’t actually… Anand isn’t into that much of an imagination.”

Anaita felt she could supply it and ignite something? “I know it is two people. But right now because it is three years into the relationship, it’s pretty healthy right now.”