I bet Ranbir's count is more than 10: Sanju on girlfriends, reacts to own 308 tally

The ‘Saheb Biwi Aur Gangster 3’ actor spoke about his own biopic, Ranbir Kapoor and more in an interview. 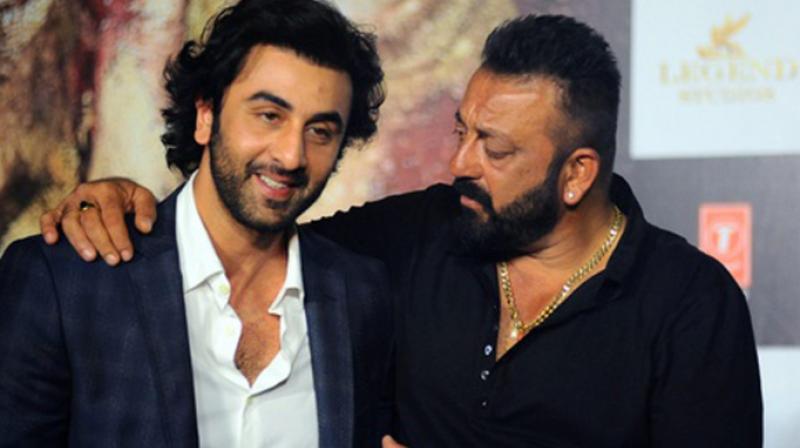 Ranbir Kapoor and Sanjay Dutt at the trailer launch of ‘Bhoomi.’

Mumbai: The ‘308 girlfriends’ dialogue in ‘Sanju’ was one of the most talked aspects when the trailer was released, with even the line preceding it fuelling a complaint against the makers for demeaning sex workers.

When Ranbir was asked about his count at the trailer launch, he was quoted as saying, “I have had less than 10 girlfriends" and he added, "I like love stories. I am more on the romantic side, not tharki."

The man on whom ‘Sanju’ is made, Sanjay Dutt, however, is not convinced about Ranbir’s comment.

“I bet his count must be more than 10,” Sanju told Indian Today in an interview.

About his own tally of 308 girlfriends, he said in the interview, “I just felt that the count must be 308. Now, I don't know their names and I don't know their... I haven't kept count that way. Even in the film, it's like that. He says, 'Maybe itna hoga.' It was quite a big score.”

Ranbir’s act has fetched him thunderous response from fans and crtics alike and Sanju also echoes their thoughts, “Ranbir was much much better than the real Sanju. He does really come across so well that I couldn't find any flaws.”

A section of the audience felt the film was an image-cleaning exercise of the actor, but Sanjay Dutt disagrees, “I don't think anybody would spend Rs 30-40 crore to change his image. That is too much of money. Whatever they say is their point of view. I have told the truth. The truth has been accepted by India. I am happy that people have accepted my life and learnt from it.”

With the film inching close to the Rs 300-crore at the box office, there’s surely no doubt that most of India have accepted the truth.