Ranbir-Katrina had no fights on sets, they were very professional: Shiamak Davar

Sans 'Galti se Mistake,' Shiamak has choreographed all the songs from the musical film 'Jagga Jasoos'. 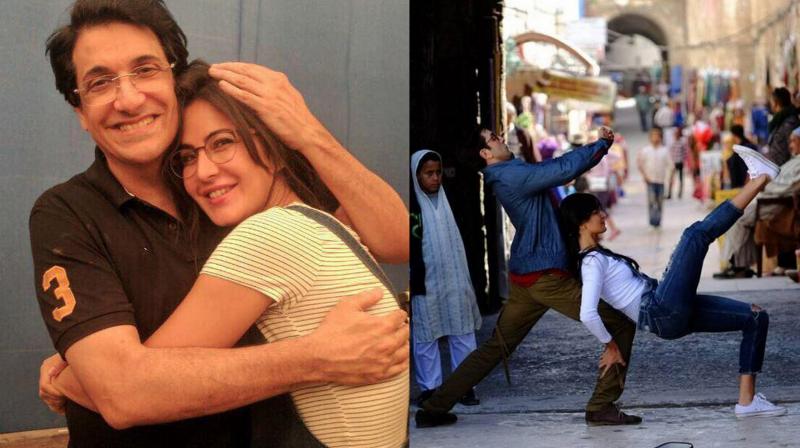 Shiamak on the sets of 'Jagga Jasoos' with Ranbir and Katrina.

Journalists when assigned an interview need to break the ice to build a rapport with the interviewee. However, in this case, it was the other way round. He broke the ice, spoke as if we were friends who totally confided in each other, and spilled the beans about his experience working in ‘Jagga Jasoos’. He thinks old is gold, and who doesn’t? He’s made the who’s who from Bollywood dance to his tunes, and now has the terrific Ranbir Kapoor and outstanding Katrina Kaif following his steps in ‘Jagga Jasoos.’ He’s the man behind the fresh and quirky dance steps in this film. Sans ‘Galti se Mistake,’ he’s choreographed all the sequences for Ranbir-Katrina. Meet this man through his words- Shiamak Davar, who adds his element in every dance form and creates magic.

How would you describe your experience working with the ‘Jagga Jasoos’ team and on the songs?

Anurag Basu is such a great director, that I hardly had to do anything. With such people, my work becomes ten times easier. He is talented, does improvisation and has immense knowledge of music, which makes me completely feel spiritual, which I want. He’ll just give me a brief, and is always very happy with the results I produce. I’m so glad that Ranbir Kapoor is also one of the producers of this film and is also the finest actors in our country, a very nice person to deal and work with. When Ranbir approached me for this film, I immediately gave a nod. Moreover, when I learned Anurag Basu is directing the film, I just couldn’t contain my excitement and Katrina Kaif was a special bonus. Anurag’s soundtrack for ‘Barfi’ was outstanding, and Ravi Varma, one of the finest DOP’s (Director of Photography) has shot the film. I love him so much that I just jumped on him when I met him on the sets.

The audience has fallen in love with the unique dance steps in the song ‘Ullu ka Pathha’ and other songs from the film?

I really didn’t expect ‘Ullu ka Pattha’ to do so well because it’s a travelling song, not the usual song or item number. However, when the song released, phenomenal reviews started to pour in. Everyone is accepting and enjoying the fresh, funny and quirky choreography of this song. I was very touched with the recognition the choreography received for it.

So, does it become difficult to choreograph for such unique story-telling songs?

‘Ullu ka Pattha’ is dominating the chart-numbers and I couldn’t believe that people are actually loving the dance and song both. We didn’t expect it to be this huge. I’ve never found choreography challenging. In fact, half the work is done because the music around you tells you what to do. Every music instrument tells you something the lyrics say something, and half of the work is done. At times, you suddenly want to change the entire choreography to match up to the location.

Where do you derive your inspiration from?

I’m reading a book called ‘The Laws of the Spirit World,’ which has completely changed my life. This is my source of inspiration.

What kind of learners are Ranbir Kapoor and Katrina Kaif?

It’s very different with Ranbir and Katrina. They are very professional. What is beautiful about them is that they’ll never ask you to change the step just because they are unable to do it. My style is very difficult, despite which they would pick up steps very fast and they were very good.

Saying that they are professionals, did their personal differences ever affect your work?

Ranbir and Katrina, both are my friends. I never had a problem with them. Reports of Ranbir and Katrina behaving stupidly and having fights on the sets, nothing ever happened. They wouldn’t really speak too much, but when they worked they were very professional. There was no tension between Ranbir-Katrina on set or during rehearsals.

Who do you think is a better dancer- Ranbir or Katrina?