Roshan Taneja: The man behind many Bollywood faces

Bollywood stars pay homage to the veteran acting coach and pioneer of method acting in India. 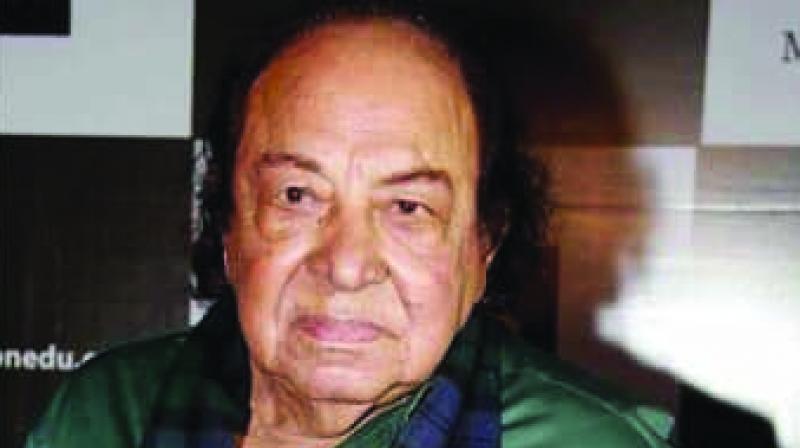 Roshan Taneja, the acting guru who had tutored dozens of shishyas in Bollywood during the last five decades, passed away on Friday after being diagnosed with pancreatic cancer.

Roshan Taneja, the acting guru who had tutored dozens of shishyas in Bollywood during the last five decades, passed away on Friday after being diagnosed with pancreatic cancer. He was 87. His life’s work gained him great respect from peers and contemporaries, and also gratitude from several bigwigs from film and television world who trained under him. Roshan Taneja has been hailed as the pioneer of method acting in the Hindi film industry.

Though considered a veteran in the business, Roshan actually wanted to be an actor himself; but, there were other plans set for him. He found himself teaching acting at FTII, Pune back in the 60s and later founded an acting school of his own in the 70s. The name of the school was plain and simple — Roshan Taneja School of Acting.

That was the time when acting as a profession was still in its nascent stage, and there was no formal coaching available. Most learned either through theatre or by picking inspiration from the other actors who had made it big. This is where Taneja, who had enrolled himself in an American acting school prior to opening his own school, brought in a revolution into Bollywood. He championed a form of acting called ‘method acting’, a phrase that was hitherto unknown till then.

While from the earlier generation, actors like Anil Kapoor, Naseeruddin Shah, Shabana Azmi, and Om Puri trained under him, during later years, his alumni included names like Suniel Shetty, Ajay Devgn, Juhi Chawla, Madhuri Dixit, Govinda, and Jimmy Sheirgill to name a few. As for the current generation, Ranbir Kapoor, Sonam Kapoor, Abhishek Bachchan, Emraan Hashmi, and many more actors have gained from his tutelage.

He is fondly remembered as a man who was humble, understanding and most importantly, motivating. He would push students to find the perfect expression, while his patient demeanor made him approachable rather than intimidating. This is what set him apart, even as many other acting coaches mushroomed in Mumbai, especially during the last couple of decades.

Today, Roshan Taneja may have gone, but in the process, he has gifted the film industry polished talent. His legacy is being carried forward by his son, who now runs the acting school.

There is a saying in show biz, that the show must go on. In the world of films, this will indeed happen, but the memories of Roshan Taneja will live on too.

He was such a great legend. He taught my father. When I was shooting for Saawariya (Ranbir’s debut film) I went and did some classes with him as well. He has been such a great talent. He has been an amazing boon to our film industry and I hope that his soul rests in peace.

Roshan Taneja saab was the vanguard of method acting in India. Not only was he a phenomenal teacher, but he was also a great human being! Everyone who crossed his path would automatically love, admire and respect him. For me, he will always be the greatest acting teacher in India.

I am shooting in Jharkhand. It was my friend and colleague, actor Kanwaljeet who informed of Roshan Tanejaji’s death. I am deeply pained. My mind races back to the time when I was a young, nervous shy Hyderabadi girl who couldn’t speak Hindi or English, only Telugu. Taneja saab helped me overcome my shyness, he taught me Hindi. Everything I know about acting today I’ve learned from him. He instilled self-confidence in me, which I lacked. I remember once I enacted a scene from My Fair Lady and Taneja saab complimented me saying I was better than Audrey Hepburn. I didn’t know who she was (I had to ask my batchmate, Shabana Azmi about it) but I knew it was a big compliment. While I was at the Pune Film Institute some of the greatest talents also trained with me under Taneja saab’s tutelage: Rehana Sultan, Shabana Azmi, Shatrughan Sinha, Jaya Bhaduri, Radha Saluja… I wonder if the film industry knows how much it owes Taneja saab. I met him for the last time six months ago. It always felt like family with him. I will rush to meet his wife and sons as soon as I return to Mumbai.

I’d like to believe I was Taneja saab’s favourite pupil. He made me feel special. He boosted my confidence. He taught me everything about acting. The oratory skills for which I’m praised came to me through my many sessions with Tanuja saab. He virtually dragged a Bihari boy out of his provincial shell and made him a confident actor. Whatever I am, an actor and an orator, I owe it to him.

Taneja sir, the man who brought acting training to India, has not only taught me acting, he is also my guru, mentor; he was also like a parent to me. He gave me a job as an acting teacher right after I passed out of class and that job gave me the opportunity to not only continue learning even as teacher, but the salary I got also put food in my stomach and gave me the strength to continue the struggle to get an acting opportunity. That also happened because of Taneja sir. While I was an assistant teacher with him for Sanjay Dutt’s training, Taneja sir spoke to Dutt saab and got me my first break in Rocky.

He was an excellent teacher who paid attention to every detail and would always keep a low number of students in a batch so nothing would ever miss his eye. He would tell when he thought the student was ready, so it was not a timed course, it was till he felt you are completely ready. His dedication to teaching the art will stay unparalleled. He always treated us like family.

Taneja sir was the first acting guru who introduced the method school of acting in India, based on the Stanislavsky method of acting. The film industry was amazed when they saw the fresh acting talent performing so naturally, confidently and effortlessly in front of the camera in their debut performances. This was all due to the mastery of Taneja sir, who infused confidence to face the camera without an iota of fear and hesitation. Therefore the results were positive and we all were received with open arms and respect by the film industry. So the entire credit goes to Taneja sir for his meticulous training, which made his students rise and shine at the right moment.

I spent six months doing a course with him in 1985. He helped me get rid of a lot of my inhibitions, helped me open up as an actor. He was a one-man acting institution.

— With inputs from Subhash K Jha and Sanskriti Media