Madhuri Dixit and Sanjay Dutt were apparently in a relationship in the early 90's. 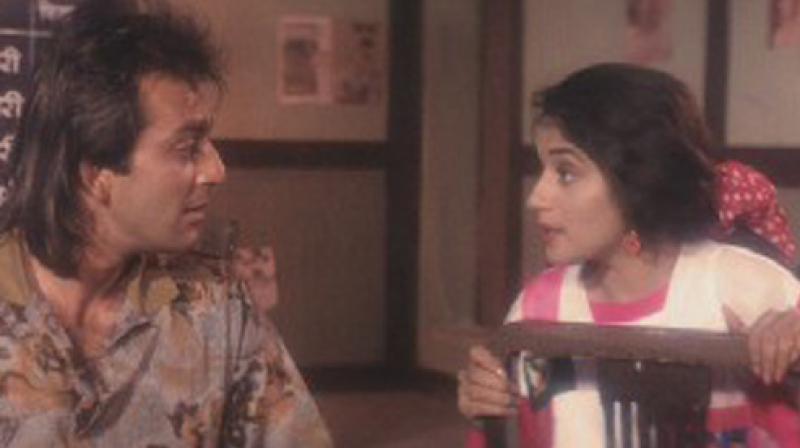 Sanjay Dutt and Madhuri Dixit in a still from 'Saajan'.

Mumbai: Madhuri Dixit and Sanjay Dutt’s rumoured love story in 1990's was one of the affairs, which made headlines every now and then.

They’ve given hit films like ‘Saajan’ and ‘Khalnayak’ in the past. Their affair ended when Madhuri started maintaining a safe distance from the actor, post his involvement and his imprisonment in the 1993 Bombay blast case.

Years later, filmmaker Rajkumar Hirani is weaving the life of Sanjay Dutt into a feature film.

Reports suggest that on Madhuri’s request to Rajkumar Hirani, her existence in his life has been vigilantly cropped from the biopic.

Talking about it in the open to a tabloid, the dhak dhak girl squashed these rumours saying, "For where I am today, this [the topic of Dutt] has become redundant. Life has come a long way since then. I don't know where these reports are coming from. In any case, it doesn't make a difference to me."

According to a report, it has been said that Sonam Kapoor will portray an amalgamation of all his love interests in the early 90’s.

The biopic on Dutt’s life is in its initial stages of shooting, and Ranbir Kapoor has stepped into the shoes of Sanjay Dutt.

The film is reportedly titled as ‘Dutt’.