Entertainment   Bollywood  13 May 2017  There was a time when Prabhas was stressed for money: S S Rajamouli
Entertainment, Bollywood

There was a time when Prabhas was stressed for money: S S Rajamouli

When he didn't receive his due payment for Baahubali and he didn't sign any projects, he was almost broke. 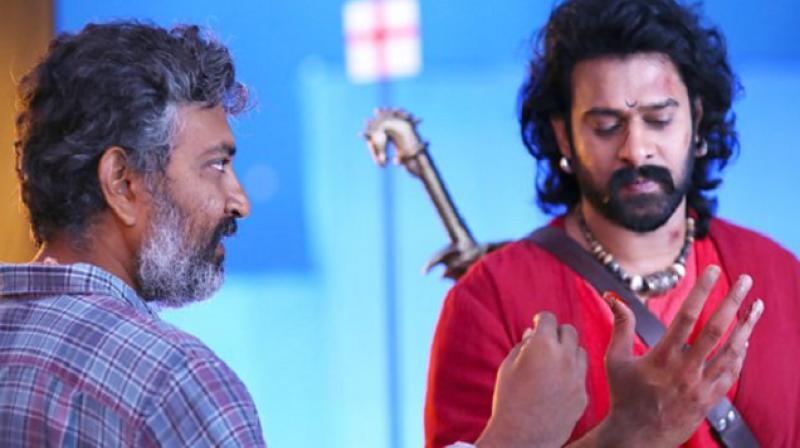 Rajamouli directing Prabhas on the sets of 'Baahubali.'

New Delhi: Prabhas, who exhibited his acting prowess on-screen with the 'Baahubali' franchise, has become a phenomenon that several brands want to be associated with.

It is a known fact that the 37-year-old actor dedicated 5 years of his career solely to 'Baahubali,' but what remains unknown is that he let go of brand endorsements worth Rs 18 crore that came his way during the filming of the magnum opus.
Prabhas, who has been an accomplished name down South, was approached by the brands ranging from apparel, shoes to fitness and FMCG products, but the actor held his ground.

The film-maker shared that even during the times of financial lows, Prabhas chose to stay true to his commitment to 'Baahubali.'

Rajamouli had said, "Prabhas had three consecutive hits and producers kept running after him with money but he only focused on Baahubali." But Prabhas had not received his due payment for Baahubali and having not signed up any other work for 5 years; he was almost without any money! It was his single-minded focus on the movie that he "instructed his manager not to demand anything from producers and take anything they give."

The director added, "There was a time when he (Prabhas) was stressed for money." However, even at that point of time, he did not accept other offers that came knocking at his door.

While all the other members of the cast juggled multiple projects and work, it was Prabhas who turned down any other work that would deviate his focus from 'Baahubali.'

Praising Prabhas, Rajamouli added, "The whole film 'Baahubali' was possible because of Prabhas, who being a lead actor in the south film industry, believed in this project and gave five years of his life to the film. I don't think anybody can get so much involved in the project with that kind of passion, time and commitment."

The film has crossed Rs 1000 crore mark at the global box office across all languages and continues its winning spree across the globe.

Currently, Prabhas is in the US for a month-long holiday. The actor has already signed his next project, yet another larger-than-life big ticket trilingual film, 'Saaho.'

Prabhas will begin shooting for his next in July.

Meanwhile, the actor, who is also getting Bollywood offers from top directors and production houses, is taking time to read scripts.