Rekha and Vishal Bharadwaj studied in the same college. She was a year senior. 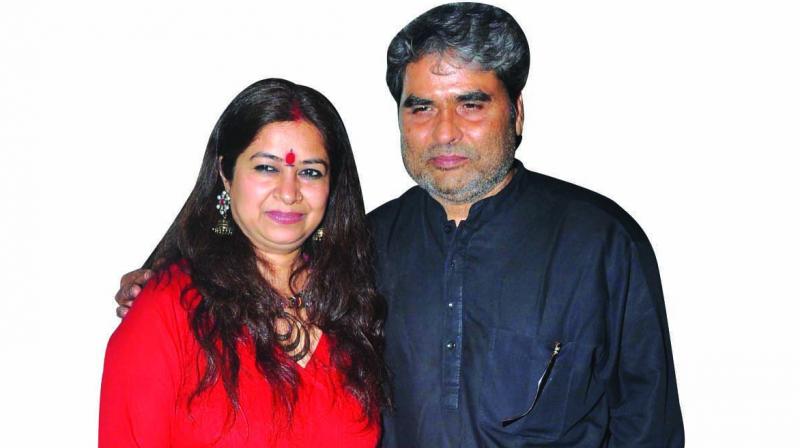 Every artist is inspired by other artists. However, if you have the dedication in finding your own voice, then those influences shape your art, says Vishal Bharadwaj.

You cannot learn to compose music. You are born with it, says multi-faceted filmmaker Vishal Bharadwaj, adding he learnt a lot from wife Rekha and Sultan Khan sahab.

Vishal Bhardwaj has already made a name for himself with his music in films — Omkara, Maachis, Ishqiya and Haider, and already has seven national awards in four categories to his credit. And yet, he feels the Kerala State Film Award for Best Music Director for his work in the Fahadh Faasil-starrer Carbon is “immensely satisfying as a music composer”.

It’s his second film in Malayalam, the previous one also being Daya, in 1998. Interestingly, it’s also the only other industry apart from Bollywood that he has done multiple projects.

This acclaimed filmmaker-screenwriter-composer has had a rollercoaster ride. From a cricketer to a music composer to a director, he has successfully worn many hats. He gives credit to his father, who was a poet and a lyricist, for him becoming a composer. “He (father) always told me that this is the director’s medium,” he recalls. The couple bared their hearts during a chat.

Seems Jagjit Singh had once pointed out the lack of spark in Rekha’s voice. But little did that affect her fame.

“I still feel I am stupid although I am much smarter now. I realised being a fool is not a bad thing. Being simple is no curse either,” she says. She goes on to give an insight on ther composer-singer relation at work and the husband-wife bond at home. She says, “I have learnt a lot from Vishal’s passion of music. Our compatibility in music is very strong and we both strive to achieve quality. Mediocrity is something we don't like to cater to.”

Rekha and Vishal Bharadwaj studied in the same college. She was a year senior. “We met because of music. I did not even know Vishal was in the same college. We met during the annual music function,” she recalls. Those days both Vishal and Rekha would compose music. It is believed once Vishal approached her with a ghazal composition which led to their friendship.

Rekha recalls, “We were more of friends first. But when Vishal’s father died and he shifted to Delhi, we started getting close to each other.”

In the movie Chachi 420, says Vishal, “They needed a fresh voice for the song, ek woh din bhi the. I made the director listen to a few voices and mixed Rekha’s voice in too.

When Rekha finally sang the number the director realised she was Vishal’s wife. While he liked her voice, yet Asha Bhonsle was being chosen for the final dubbing. But that was not to be and the final song came with Rekha’s voice.

The Sasooral genda phool singer has been trained in Hindustani classical and classical from the Indore gharana says that she never had to bear rejection. She knew she had a different voice. “I didn’t want to sing two lines for films or never wanted to be a secondary singer,” she says. The couple went on to make a private album but it took years to release, as no one was interested in it. That was the real struggle, they recall.

Remembering his initial days of struggle, Vishal says, “When I went to Bombay, there were very few avenues. There were films and Doordarshan (DD). It was very difficult to find work. Now things are different. However, if you have a mindset to go to Mumbai and make it big, you will surely find success in that city. That’s what happened to me.”

Gulzar seemed to have changed their lives. He got his break. — Jungle Book, followed by Matchis. Gulzar, says Rekha, used to tell him, “Be patient, have success on your terms.”

When asked about how does he manage to maintain originality despite his various directorial influences, he says, “I believe that influence is not only on me but on every creative person. Every artist is inspired by other artists. However, if you have the dedication in finding your own voice, then those influences shape your art.”