Entertainment   Bollywood  13 Mar 2017  'I am not nepotistic, I am fair': Karan takes dig at Kangana's 'nepotism' jibe
Entertainment, Bollywood

'I am not nepotistic, I am fair': Karan takes dig at Kangana's 'nepotism' jibe

On the last episode of 'Koffee with Karan', the filmmaker took the opportunity to take a dig at Kangana's jibe. 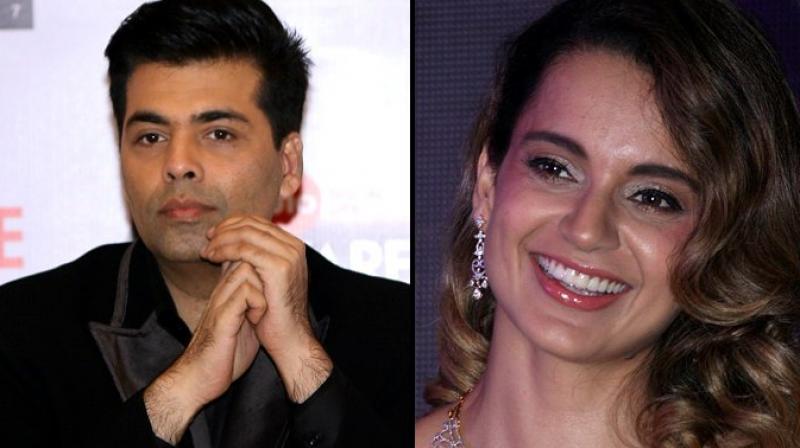 Kangana Ranaut had worked in 'Ungli' produced by Karan Johar.

Mumbai: It is rare to see two celebrities from the film industry going at each other on public platforms but we have been witness to it over the past few days.

Karan Johar and Kangana Ranaut has been involved in a heated war of words over the past few days on media platforms. However, the controversy had actually started out on Karan's chat show ‘Koffee with Karan’ where the actress had called Karan intolerant towards outsiders and a ‘flag-bearer’ of nepotism.

Karan had later slammed Kangana for playing the 'victim card' and 'women card’ repeatedly and asked her to leave the industry if it was so bad. He had also hit back at the ‘nepotism’ accusation by saying that he was not launching his nephews, nieces, daughters, and sons and that there were 15 filmmakers who were not from the film industry he had launched in the industry.

Kangana had sensationally hit back at Karan by saying that she used the 'badass card' and that Karan was no one to ask her to leave the industry.

And on the last episode of the fifth season of his show, the Koffee Awards, shot before the two sensational interviews given by the two stars, Karan has hit back at Kangana's ‘nepotism’ accusation in a light-hearted way.

The episode, which awarded stars who appeared on the show, on categories like ‘best performance’, best dressed’ among others had Malaika Arora Khan, Neha Dhupia, Ayan Mukerji and Rohan Joshi as the judges. Karan's ‘students’ Alia Bhatt, Sidharth Malhotra and Varun Dhawan, often referred to as his 'children', did not have a great day as only Varun managed to win an award.

Karan took the opportunity to take a ‘dig’ at Kangana's ‘nepotism’ accusation and at the end of the show, said, "I was all for Ranbir and Ranveer but it was not me, who was deciding it. And, hey I am not nepotistic. If you notice, the students (Alia, Varun and Sidharth) didn't score, so how does that make me nepotistic. Alia went home with nothing, Sidharth didn't an award. Varun won one. So, hello I am being fair."

With the show finally coming to an end, some of the sensational statements and light-hearted ones like these will definitely be missed.