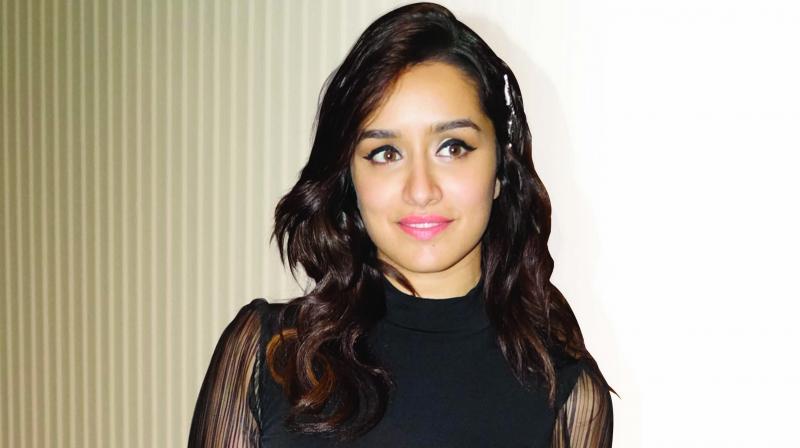 The pretty and petite Shraddha Kapoor raised the capital’s chilly temperature on her recent visit to promote her forthcoming movie Ok Jaanu along with co-star Aditya Roy Kapoor. Donning a sheer black dress, the gorgeous actress spoke about her love for food, failures, live-in relationships and more. Excerpts:

Live-in relationships
Her forthcoming movie, a remake of Mani Ratnam’s Tamil directorial OK Kanmani, has a couple in a live-in relationship. Co-incidentally, the actress was recently in the spotlight due to rumours doing the rounds about her supposedly moving in with her Rock On 2 co-star Farhan Akhtar. The actress had slammed the reports saying gossipmongers went ‘overboard’ this time. Quizzed if in the future, when she finds someone worthy of love, will she be open to moving in with him before marriage, she remarks, “I am quite open-minded about the entire idea. However, I am extremely attached to my parents and have been living with them since the time I had opened my eyes. So the idea of ‘moving out’ from their house is difficult for me rather than ‘moving in’ with someone I love.”  She goes on, “My father actually has a funny solution to this issue. He has been saying that if in case I don’t want to move out… he will be happy to invite my husband to stay with us.”

Gulzar Saab’s word of advice
The actress and her co-star had a rare opportunity to work with Bollywood’s legendary lyricist Gulzar in Ok Jaanu. Shraddha shares that Gulzar saab had given them an important piece of advice when they had gone to meet him at his residence: “When Aditya and I went to meet him at his home to speak about the movie and listen to the lyrics, he told both of us to respect Hindi language. He elaborated on the importance of speaking or pronouncing Hindi words correctly as it is the sole medium through which we are able to reach the mass audience. I found this advice extremely unique and important. I am going to obey it like a myrmidon.”

Failures and rising up
The actress had a mixed bag of success and failure last year. When quizzed about how she overcomes failures and how badly does that affect her, she puts forth: “Failures affect me a lot. Because one gives so much time, energy, passion, dedication and love to a project and it’s unfair that its fate sort of hinges on just three days: Friday, Saturday and a Sunday, which if unfavourable, is completely disheartening. It’s a very unsettling feeling but I generally focus on my next project to overcome the sadness.”

Demonetisation and the movie business
Shraddha’s last movie Rock On 2 was reportedly hard hit by demonetisation. But she says that apart from her professional setback, her personal life too saw some ups and downs: “We all were affected but my staff at home was worse hit. However, I made sure that they became aware of the real issue and provided them solutions to tackle it tactically.”

Foodie Funda
The actor-songstress is a self-confessed foodie. She reveals, “Since the time I have landed in Delhi, I have been binging. There’s a misconception about actresses being on a diet and not eating, however, that’s not the case with me. A few things I have tried till now include delicious makke ki roti, sarson ka saag, some lovely bhindi, butter chicken, mutton korma, baingan ka bharta, kofta... I love eating out when I am in Delhi.” She adds, “The weather in Mumbai is a complete contrast. I am so glad to be in Delhi also because I love this weather. Sab thanda thanda and cool cool. I feel so glad to be wearing all my jackets, sweaters and stockings. I rarely get a chance to don them when I am in Mumbai.”