Oshiwara cops also booked 3 others based on Dutta’s statement. 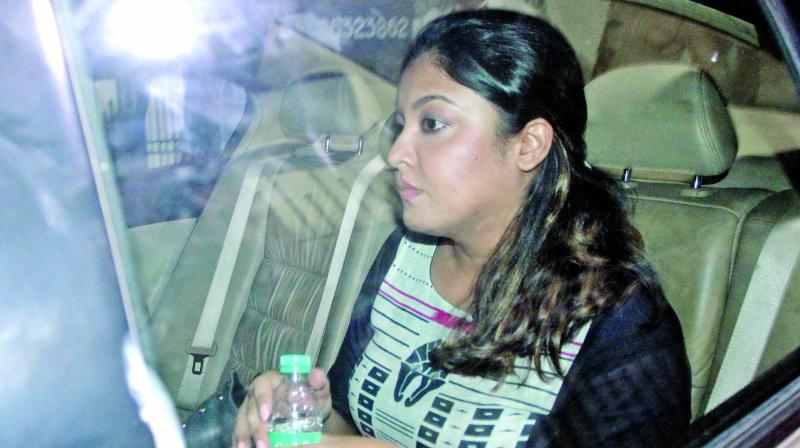 Mumbai: The Oshiwara police on Thursday booked actor Nana Patekar, choreographer Ganesh Acharya, director Rakesh Sarang and producer Samee Siddiqui for sexually harassing and molesting Tanushree Dutta during a film shoot in 2008. While police action is still awaited in the case, Dutta is all set to file a litigation in the Bombay high court seeking action against those officers of Goregaon police station, who allegedly did not take write down her sexual harassment complaint in 2008.

In her fresh statement to the Oshiwara police on Wednesday night, Dutta specifically mentioned that the police did not record her statement in 2008, as per her account. Only the FIR for rioting and causing damage to her car was registered keeping out the main grievance of sexual harassment from the FIR, she told the police.

Dutta’s statement ran into four pages and it stated, “Many parts of my complaint have not been mentioned in the statement and not recorded as per my say. I could not understand the Marathi version of the FIR and instead of myself, the police took the complaint of my father as FIR bearing the number 179/2008.”

She further stated that after this incident, she had been threatened, pressurised and subjected to undue influence with threat to boycott her from the film industry and implicate her in a false police case by Patekar, Siddiqui, Acharya and political outfit Maharashtra Navnirman Sena (MNS), Dutta said in her police statement.

Dutta and her legal team stated that they wanted accountability on the part of the laxity of the police. “We will approach the Bombay high court asking for action against the Goregaon police for not taking everything on record, and CINTAA for not acting on Dutta’s complaint,” said Nitin Satpute, Dutta’s lawyer.

The controversy hovers around a song sequence that was to be featured solo on Dutta. Earlier, it was to feature Patekar for one line in the song that was to be shot separately. Shooting of the said song started at the Filmistan studio in Goregaon on March 23, 2008.

“The producer and director also committed to keep in my comfort level with the clothes and dance steps. Before the shoot I had told them that I will not enact or perform any lewd or vulgar steps in the particular song. But on the fourth day of the shoot, in between shots Patekar, against my will and consent, started grabbing me by the arms and pushing me around on the pretext of teaching me how to dance even though he is not the choreographer.”