Post Nana Patekar, Housefull 4 actor Sajid Khan has been accused of sexual misconduct by more than one woman. 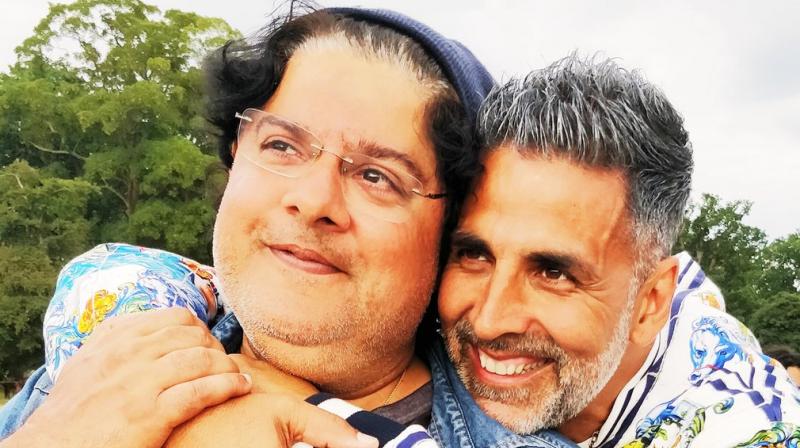 Post Nana Patekar, Housefull 4 actor Sajid Khan has been accused of sexual misconduct by more than one woman.

His assistant then, Saloni Chopra, shared on her Instagram story that it was in 2011 she interviewed with Sajid Khan for the position of his assistant director. He asked questions like if she has ever been sexually abused or if she would ever get a breast job and opined how sex is about a mental connection. She broke down after the interview, but got the job. When she started working for Sajid, he said that she was a ‘director’s assistant’ not an assistant director. She writes that he started calling her at odd hours and asked what she was wearing or what she ate. He asked her to send him bikini photos as he wanted to check how she looked if she ever wanted to become an actor.

She faced repeated harassment and Sajid Khan always passed comments like she wasn’t sexy enough or didn’t have enough ‘oomph’. She mentions how he would say horrible things about his then girlfriend. Sajid Khan allegedly talked about the size of his dick and asked Saloni to touch it. His harassment continued and Saloni writes about an incident where he asked her to lift a skirt of a girl who was playing a role in his movie; he insulted her and commented that how did she think she would become an actress without having any breasts or ass.

When the harassment continued for months, on one night Sajid Khan asked her to come to stay at his house. When she asked him what she wanted from him and if it was about sex, she was ready only if he'd back off after that. Sajid yelled at her and told her that she was stupid if she thought it was only about sex. It was about being his 'little bitch' who does everything asked by him.

When she pleaded and asked him what it is that he wanted from her, "he said he wants me to do everything he tells me to. Stay with him. Maybe he'll ask me to touch myself in front of him, maybe he'll want to record it. He'll do things to me and give me orgasm and teach me the art of sex but maybe he won't actually put his dick inside me. Maybe he will.But it would be up to him what he wanted and if I thought casting couch was just about one time sex then I was foolish. No one would cast me unless I was ready to be their 'keep', Saloni writes.

The next time she went for shoot, she was petrified. Sajid asked her to write a column for him, she started writing. They didn't talk about anything else until Sajid Khan snapped, 'Spread your legs when you sit.' When Saloni refused, he started again about how she was unattractive and then he tried to grab his hand and put it on his dick to show her that she did not give him a boner. He kept yelling, 'see? you don't even make me hard'

Saloni threw the laptop and walked out of the room. He called subsequently only to keep threatening her.

It did not end there. A journalist also issued a statement where she was called to Sajid’s house for an ‘interview’ where he only talked about his penis, flashed it and forced his tongue down her throat. Here’s her full statement:

Sajid Khan has preyed on women in the industry for years. Here's my story. #MeToo pic.twitter.com/Rufzs9dsp6

Supporting Saloni, Ungli actress Rachel White also recollected the time when she was called for audition of Humshakals and was instead asked about boobs and then told to strip in his house. Here’s her detailed account:

I believe you @redheadchopra I was sent by my agency then to meet Sajid Khan during Humshakals. Right after my agency told me about the meeting Sajid called me within the next 5 mins and said the meeting would be at his house opp iskon Juhu.

I said I was not comfortable meeting at home and to that he said “don’t worry I live with my mom and she’ll be around” I felt reassured and agreed. When I went to his house the maid directed me to his room and the drawing room was empty!! It was his bedroom

I stood like an idiot in one corner of the bedroom wondering where to sit and he was on one side on the treadmill. I clearly rem this episode. When he saw me walk in he goes “pls come this side” all smiling . I walk up towards the treadmill . He was directly staring down at me

I was in a white vest and blue denims and still felt I was standing nude with that gaze. What happens next is that he finishes his cardio and walks up to me asking me about my boobs and making that kind of conversation. I didn’t bother to answer to anything.

After that he asks me to strip for him bcoz there were scenes in a bikini and he needed to see how I looked. I replied saying “there are pics of me in bikinis sent to u,I think that should good for u” n wen he insisted I said “I’m ready to parade ur office in a binkini nt at home

Finally he goes “listen no one has a problem with these things” (and obviously named people) and that if I could seduce him in 5 mins the role was mine.
How this ended was me saying that I didn’t come mentally prepared for this and I left his house!

So yeah believe you with ur story. And I told u mine so that more people can believe you and stop making women look like attention seekers. 🙏

Twitter too blasted on Sajid for his behaviour. Here are some reactions:

Shame on you sajid khan..😱 https://t.co/DhQjMmN2rF

After reading this, Twinkle Khanna told the Housefull 4 team to take strict action, soon after which her husband Akshay Kumar tweeted that the shooting for the film has been canned till the court takes a decision.

Appalled hearing multiple incidents of harassment and it is truly horrific to hear what these women have been through. Everyone involved in Housefull needs to take a firm stance on this issue. This cannot go on.

Appalled hearing multiple incidents of harassment and it is truly horrific to hear what these women have been through. Everyone involved in Housefull needs to take a firm stance on this issue. This cannot go on.

Surprisingly, Akshay didn’t take a stand right after Nana Patekar was accused, despite Tanushree Dutta requesting Twinkle Khanna to speak to Akshay about the same and ask the superstar to stop working with the accused. Akshay stopped working on Housefull 4 after his director Sajid Khan was accused of misconduct.

Anyhow, Sajid himself cleared that he will not be directing till a judgement on him is passed.