Teachers hail 'Super 30' at a special screening; All praise for Hrithik's performance

There were tears, joy and pride all over which Hrithik's this gesture. 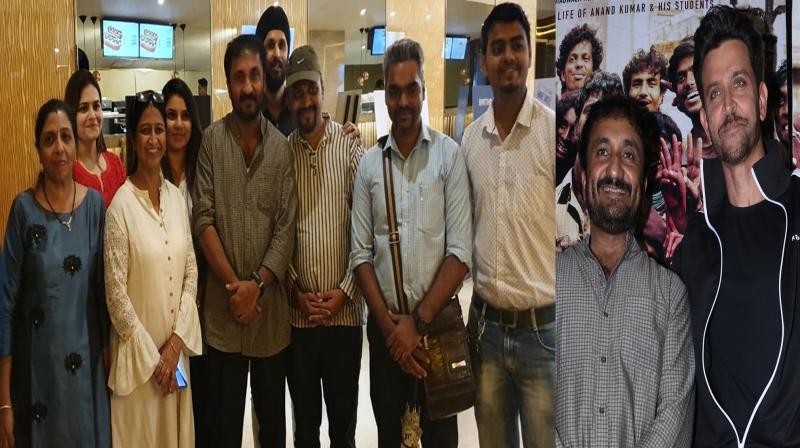 Mumbai: Ahead of the much-awaited release, the makers of Super 30 organized a special screening of the movie for the teachers and professors of Mumbai. A number of teachers showed up from different schools and colleges and everyone present at the screening was thoroughly impressed with the movie and really appreciated the gesture by Hrithik Roshan to invite the 'nation builders' for the screening, calling it a must-watch for the parents!

The real-life and reel life duo of teachers, Hrithik Roshan and Anand Kumar were also present at the screening to show support for the fraternity of teachers who help shape the future of our country- as the strong narrative of the movie, Super 30 highlights.

The teachers were delighted to witness how the importance of their profession has been acknowledged and appreciated by Hrithik and the filmmakers. Professor Zinat after the screening shares, "This is a must-watch! Super 30 is a superb movie and I feel, teachers have never been respected so much before. But, this movie and the gesture by Hrithik surely, makes me the happiest. Hrithik's performance is brilliant and I urge every parent and teacher to watch it.” So shared another teacher, Sunita who expressed, “performance par excellence and Super 30 is the most important movie for India, today”.

Telling us more about the movie, professor Gajendra Deoda said, "Super 30 looks like a documentary of a global order which is made in the most entertaining way. Hrithik is so true to the soul of his character. I thoroughly enjoyed every bit of it".

Also Read | Super 30 review: A story worth telling, a movie worth watching

When asked about the most relatable scene from the group of teachers present at the screening, it was how Hrithik brings about the children and the formulae together to create the bright future of the nation-stays an everyday struggle for the teachers and the movie was inspiring on so many levels, as Professor Tarveen shares.

There were tears, joy and pride all over which Hrithik's this gesture. The teachers were all praise for the actor and shared a moment with Anand Kumar also at the event. It was a sight to witness the nation builders, real and reel all at one place.

Since the trailer of the movie was released, there has been a massive hype amongst the audience for the movie and as Super 30 releases today, the world will witness Hrithik Roshan's promising portrayal of Anand Kumar on screens. Fans throughout the world are eagerly waiting for 'Super30' to release and the pre-bookings for the movie have been going on in full force, causing theatres to fill out faster than predicted.

The actor will be seen essaying the character of a teacher in Super 30. Hrithik will be reprising the role of a Mathematician, Anand Kumar who trains students for IIT-JEE in Bihar. The movie also features Mrunal Thakur alongside Hrithik and Pankaj Tripathi as Hrithik's opposition.

Talking about Super 30, the actor has definitely gotten into the skin of his character of a Bihari Maths teacher by hitting the right chords with the strong accent. The fans are taken aback by the Bollywood Superstar delivering yet another stellar performance in a never seen before avatar in Super 30 trailer.