Taapsee Pannu is ‘really struggling’ to get films like Judwaa 2

Taapsee Pannu, who is dying to wear a bikini on screen after Judwaa 2 has been getting all kinds of serious roles. 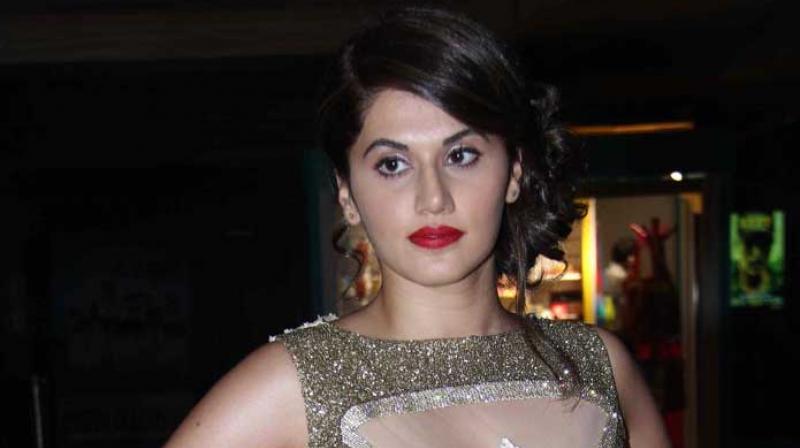 Taapsee was seen in 'Judwaa 2' this year.

Taapsee Pannu, who is dying to wear a bikini on screen after Judwaa 2 has been getting all kinds of serious roles. Her line up of films ahead is even more intense. With films like Mulk, Badla and Manmarziyan in her kitty, the actress is desperately looking for a breather. Taapsee gets chatty with Deccan Chronicle where she confessed a lot more personal things than ever before.

How you maintain your choices of serious films?

I don’t have an option actually. I only get these kinds of films. There is no such agenda of doing serious or intense films like Pink repeatedly. Soorma is not a draining film as Pink, it has some lighter moments also. I feel, people like to see me in such intense roles. It has to be something beyond than being just a girl in the film. I am really struggling to get lighter films like Judwaa 2. Not many people in the industry know that I want to do these roles so they don’t offer me. Once in a blue moon, I should do a lighter film as my sister is very worried to receive me back home sometimes. I never cry in real life so easily and it is an irony because a lot of my filmmakers tells me that I breakdown nicely on screen.

You were trolled for wearing a bikini in Judwaa 2…

There were certain set of audiences who loved to see me in bikini. When you work so hard on your body, you want to flaunt it. I did Judwaa 2 to show that side of me that people thought never existed. There were surely few set of audiences who were upset but I want to tell them that wait, I am not yet finished. Also, I believe if my intense films will run at the box-office, I won’t do commercial films then.

How was your camaraderie with Diljit Dosanjh?

He is a fabulous actor but very quiet. He keeps to himself and is very respectful to everyone around him. I am a totally opposite person. Sometimes, I try so hard to break the ice. I always want a comfortable equation with my co-actors else it will be awkward for me and it will show in my performance.

What are your projects ahead?

I am doing Mulk, Badla and Manmarziyan and all are so taxing. I am struggling to get a film like Judwaa 2. I promise that I will work out hard and look hot in bikini.

Your film Tadka is stuck for the longest time…

I am still to finish the film. I haven’t dubbed for it yet. So whenever I would hear from them, I will take it further from there.

Has Taapsee Pannu become a brand after Pink?

They have started taking me seriously after Pink but even now it is a struggle. No producer will pick up his phone and cast me. I still have to wait. Lately, I have started hearing things like that the makers will do a certain film only if I will do it. After Pink, I was noticed and after Naam Shabana, people could believe that I could pull off a film on my own. Though, Soorma is not a female centric film but I am sure when people will walk out of the theatres, they will remember me.

Tell us something about your character Preet in Soorma?

The only similarity between me and Preet is that we both love sports. She is a quiet, shy kind of a person from a small town. On field, she is like a tigress but off field, she is completely girly.