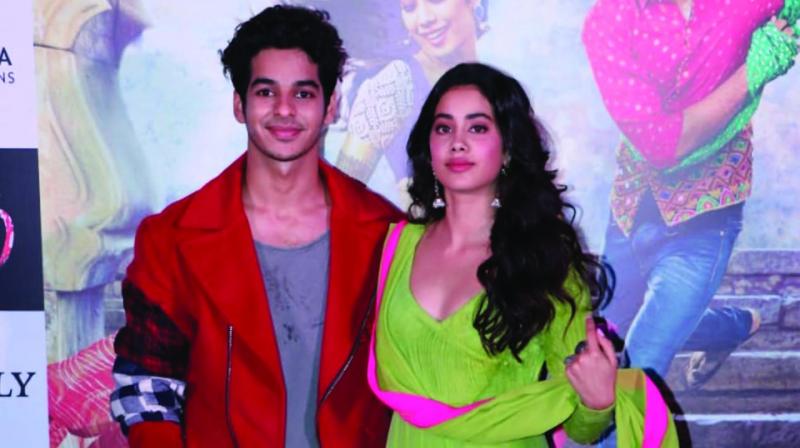 Janhvi Kapoor’s debut film Dhadak will be releasing next month. Speaking at the launch of its trailer on Monday, the debutant said that her role in the film is what she had wished for when she saw the Marathi blockbuster Sairat.

Dhadak is the adaptation of national award-winning director Nagaraj Manjule’s Sairat. While Sairat was set in rural Maharashtra, Dhadak is based in Rajasthan. Janhvi said that she had watched the original film along with her mother, Sridevi.

“I saw Sairat with my mom at home. I remember watching it and telling mom that I wish this was my first film, I wish I could do something like it. Mom and I had this big discussion about how even she wanted a role like this for me,” says elegant Janhvi.

However, the actress also makes conscious efforts to avoid any comparisons with the original film and its lead actress Rinku Rajguru. “My character is different from the original character played by Rinku. What Rinku has done in Sairat, nobody can do that. I have tried my best to be honest towards my craft,” she says.

The Dhadak girl also got emotional talking about her mother, who passed away in February this year. When asked her if she received any tips and advice from her mother, emotional Janhvi said, “The biggest and most helpful tip that she has given me is to work hard and feel every emotion. I miss my mom.”

Her co-actor Ishaan Khattar further reveals, “It was a lively atmosphere on sets and we didn’t feel any pressure thanks to Shashank Khaitan (director of Dhadak) who made us feel comfortable.”

While Dhadak will mark Janhvi’s foray into Bollywood, Ishaan has made his acting debut with Iranian filmmaker Majid Majidi’s “Beyond The Clouds”.

Karan Johar denies nepotism in Dhadak
Karan Johar has been at the centre of the Nepotism controversy in Bollywood. But ask him about the Dhadak lead pair, and he quickly says that both the actors are there because of their hard work.

“These days people keep talking about surnames, ignoring hard work behind one’s success.  It is not easy to be in front of the camera to face the audience or even the media.  These are kids. We always give a tag or a word (nepotism). I will not use the word (nepotism) or else I would be seen as promoting it. I will say that people are here not because of that word, but because of their hard work,” says the filmmaker. However, the merits of Karan’s claims will be judged on the basis of the success of the movie.

The Kapoor family had come to cheer up the new talent Janhvi. Harshvardhan Kapoor, Anil Kapoor, Mohit Marwah, Sanjay Kapoor attended the trailer launch.The sisters Khushi and Janhvi also had an emotional moment at the event.