Prashanthi says that both Rajamouli and his wife Rama were happy with her designs and styling for Baahubali. 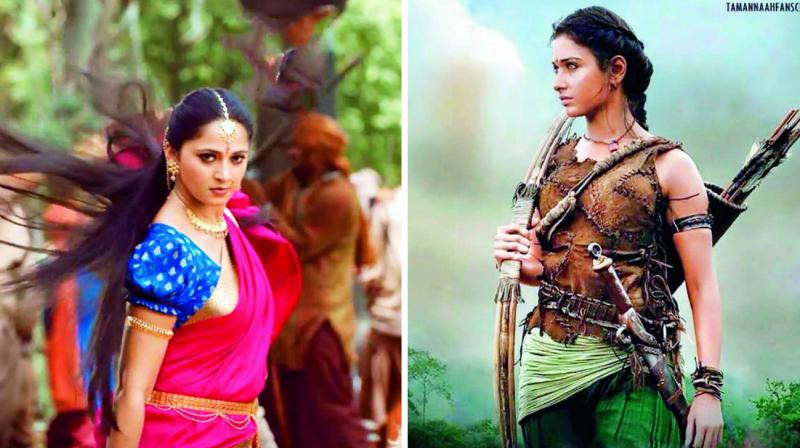 Style on point: Prashanthi designed and styled the above costumes for Baahubali — The Beginning and its sequel.

Early in life, Prashanthi, the co-designer of Baahubali — The Beginning and Baahubali — The Conclusion, discovered a love for fabrics, design and styling. On how she got into styling without being a trained designer, she says, “Right from childhood, I never preferred ready-made dresses and would always experiment with different fabrics. I got into designing by stitching and styling my own outfits.”

Prashanthi made her design debut in Tollywood with the film Vedam, seven years ago. “Creating costumes for Baahubali took us about eight months. However, since the making of the film lasted for almost five years, we would constantly be on the sets, ready to bring about any amends in styling,” she reveals.

She shares, “We chose the colour combinations depending on the moods of the characters and the sets. We kept in mind that the colour of the costume needs to blend with the storyline.”

Prashanthi says that both Rajamouli and his wife Rama were happy with her designs and styling for Baahubali. “The concept was explained so well to us by Rama and director Rajamouli that we were able to put together the best designs,” she shares.

Talking about working with Rama, she says, “She was very cooperative and gave me a free hand. She cushioned me against all problems. If there were any doubts, Rama would clear them for me. The couple is inseparable. Even if they had differences, they would talk it out peacefully.”

As for working with actresses Tammanah and Anushka, she says, “Tammanah is very professional. She is a darling and we went on to become close friends. Anushka has also been a close friend of mine, so it was very easy to work with both of them.”

Asked if she is keen on making a Bollywood debut, Prashanthi replies, “Who wouldn’t like to work in Bollywood? My close friend, writer Kanika Dhillon, has been coaxing me to come to Mumbai, saying that she will help me get a few good projects.”

On whether she would purchase a property in Mumbai like most southern actors have done, Prashanthi says, “Definitely. I am a hardcore businesswoman.” She adds, “I am keen on working in Hollywood, Tollywood and Bollywood, provided I get to design characters and films that will challenge me. Right now, I am going taking a break and shall resume work around July.”

With models walking the ramp wearing the designer dresses from Baahubali, Prashanthi says, “Today, five designers have got a Baahubali clothing line, and I am very happy and proud about it.”

A single mother who lives in Hyderabad with her 13-year-old daughter, Prashanthi confesses, “I am happy being single. Marriage is not on my mind, work is.” As to whether her daughter will follow her footsteps, Prashanthi says, “It depends. Every morning, she gets up wishing to follow a different profession! I guess we will need to wait until she grows and decides for herself.” she concludes.